A day at the beach and brewery 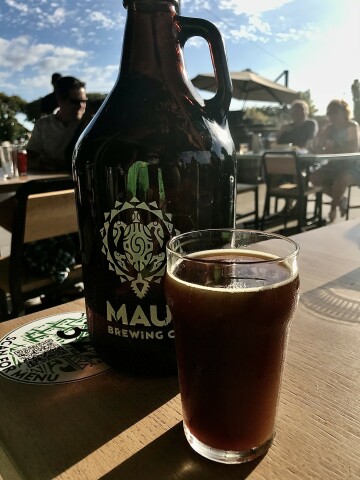 It’s May on Maui. Jacaranda in full purple bloom and bouganvillea hedges in various bright colors distract the eye along Kula Highway. The air is filled with the exotic scents of eucalyptus, jasmine, plumeria and aloha.

We’re on our way to Sugar Beach in Kihei to meet up with friends/family of my traveling companion, Seamus, Sara and 6-year-old MJ. Seamus is originally from Oshkosh, Wis., but he and Sara have been living – and teaching – on Maui for 10 years.

The sand is white, the water mouthwash blue. MJ shows us turtles congregated around a group of rocks. A turtle flipper rises briefly out of the water. And then a skinny turtle head pokes up for a breath of fresh air. MJ explains that the turtles eat the moss on the submerged rocks.

Seamus was drinking a California IPA. I didn’t catch the name. “If you don’t mind ruining your tastebuds,” he said as he offered me one.

But, no, I grabbed the first beer that caught my eye at the Kihei Safeway - Kirin Ichiban. I love Japanese beer. It’s much harder to find back home. We’re going to the beach. A match made in heaven.

The label states First Press 100 percent malt. Don’t know what First Press means. Does Kirin make a second, small beer with the same grains? Does it refer to the fact that Ichiban means No. 1 or first?
But, yes, Kirin Ichiban was a very good choice. Crisp and refreshing, just as you want sitting on a beach under a blistering sun. The first one, anyway. Forgot to bring something to keep them cold. Moved on to a Longboard Island Lager from Kona Brewing Co. from Seamus’ cooler. All I can say about that is that it was cold.

From the beach we went to the sprawling Maui Brewing Co. complex in Kihei for some craft beer Maui style. MBC is the largest craft brewer in the state. In 2012 it achieved regional brewery status, meaning, according to the Brewers Association, it produces between 15,000 and 6,000,000 barrels of beer annually (a barrel is 1.5 gallons).

Talking about MBC offerings, Seamus first mentioned a barleywine brewed with cherries and oranges, and aged in wooden barrels and then dosed with bitters made by MBC distillers. (Yes, they make booze, too.) These are the flavors of the state cocktail of Wisconsin - the Old Fashioned. And this particular beer is called Old Fashioned Barleywine.

Are you kidding me? Gotta have that.

My traveling companion says she won’t drink an Old Fashioned outside of Wisconsin. “I’ve been burned too many times,” she said.

But I’m fully onboard for what sounds like a wild beer. Last time I had a “cocktail beer,” it was Founder’s Mas Agave a beery margarita, and that was fantastic.

With the Old Fashioned, the first sip puts you in familiar territory with that unmistakable, rich barleywine flavor. And then, whoah! A complex barrage of dark flavors. And on the very back end, cherries. And, could it be? Yes! The cherries taste muddled.

This is a brilliant beer that should appeal to any misplaced Midwesterner, or any fan of barleywine. Did I mention it’s 11.3 percent? A true potentate.

We had time for one more beer before my traveling companion and I had to move on to our next location. I chose Coconut Wireless.

In Hawaiispeak, Coconut Wireless is gaining information through word of mouth. As a beer, it is a tasty, refreshing golden cream ale that bursts with the aroma and flavor of toasted coconut. Really delicious.
As we’re finishing up, a great reggae band started up, which bummed us that we had to leave, but we had a great time with Seamus, Sara and MJ, and it was time for our next commitment. Next time.