Confession of an e-bike convert 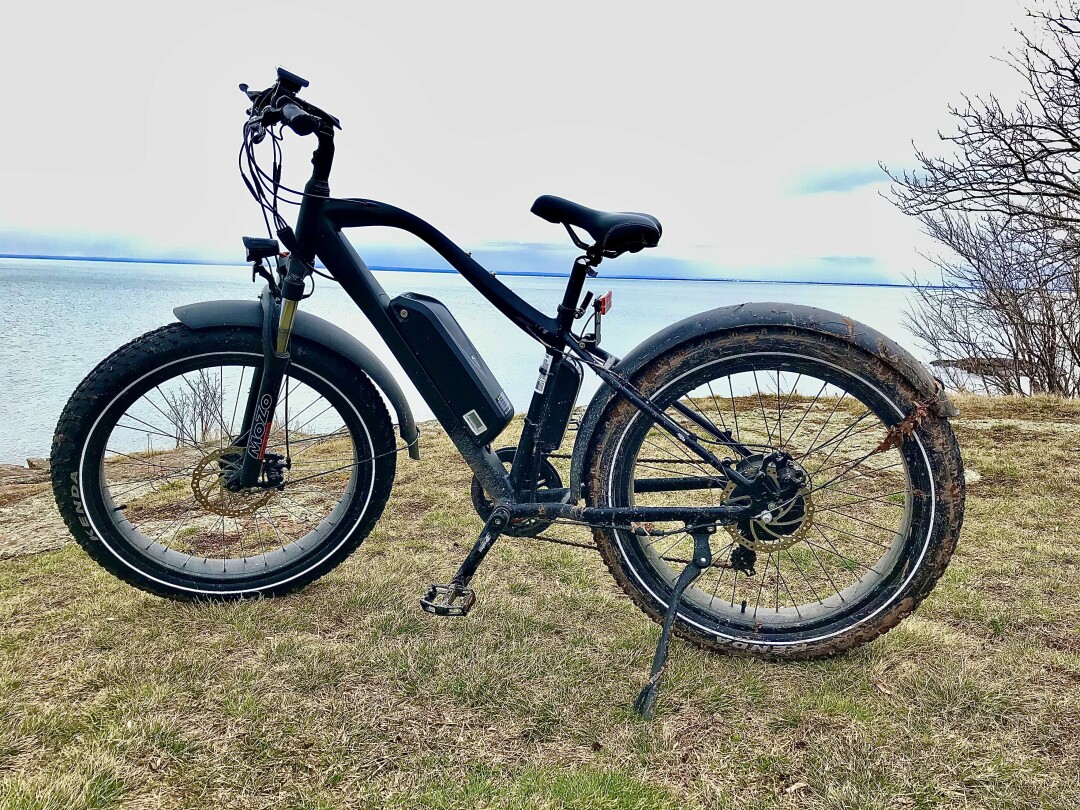 My beautiful e-beast. At 70-some pounds and on the big side, you might think it an unwieldy machine, but once you get the hang of the Stone Mountain Bike Co. Yosemite 700, it becomes a fleet and nimble mode of transport.

As a child of the ‘60s and ‘70s, I was completely imbued with the spirit of Woodstock and the back-to-the-land movement. I bought Euell Gibbons books and went foraging for wild lettuce and other exotic native plants.

One key component of that ethos was to propel oneself through life. For me, that meant riding a bicycle.

And it was pure freedom. To the top of Woodland Avenue and back. Enger Tower. New Duluth. Island Lake. Up the shore. There were no boundaries to my small world.

I vowed never to drive one of those awful pollution machines, and since I grew up riding bicycles on the mean old hills of Duluth, there was no route too daunting.

Even later, living on the East hillside of Duluth as a husband and father while attending UW-Superior, I rode my bike to school and back over the old Arrowhead Bridge. It was a wonderful ride.

But then at the age of 25, I found myself six months away from college graduation and the sole caretaker of a two-year-old daughter. Suddenly, immediately, I had to learn to drive a car. There was no way I could finish college, work two jobs and cart my daughter around on a bicycle.

I literally learned to drive overnight and got my license the next day. College pal and fellow literary striver Fred took me out for my first driving lesson in his old Ford truck. I remember the day well.

It was a Monday evening, Dec. 8, 1980. When it started to snow, Fred and I stopped at a bar on First Street in Duluth for a tap beer and a dinner of pickled turkey gizzards (remember, we were college students). Just as we sat down, Monday Night Football was interrupted to announce that John Lennon had been shot.

I vowed to pass my driver’s test the first time the next day in honor of Lennon, and I did.
And I became just another driver of pollution machines.

But I did not completely abandon my bike. In fact, I ordered studded tires from Nokia of Finland so I could commute to work during the extreme winters of northeastern Wisconsin, where I toiled through the 1990s and for most of this century.

And then in 2010, through a series of unfortunate circumstances, I was hit by a truck while riding my bike. The crash shattered my left leg in six places and broke my left index finger (causing me to have to learn how to type without using that finger, a curse that follows me to this day). When I woke from surgery, the first thing the surgeon said was, “It wasn’t that long ago, with that much injury we would have just amputated.”

So I am forever grateful that did not happen. However, I have learned to live with the constant pain of whatever rod was implanted in my leg to replace the crushed bone, and, of course, it made my left leg much weaker.

There was a long recovery, and one of the first things I did when I could get up on my legs again was to replace the bike that had been destroyed in the crash, rebuild the strength in my weak leg, and press on.

When I came to Duluth a year ago for this job, I found myself with a 10-mile commute to work best accomplished by taking the freeway. Ohmigod that is a boring drive. I can’t stand it. So I started riding my bike. I’s a nice commute when you aren’t fighting the cold wind or driving rain or snow or sheets of ice on the streets. And then a health issue arose that kept me off anything but an exercise bike through the late fall and winter.

Is age catching up to me? I just felt less inclined to fight the elements on my bike, even though I hated the car drive to and from work.

I don’t remember what got me thinking about e-bikes, but suddenly that seemed to be the only thing on my mind. I was reading about them, trying to research and find out more.

And then I just bit the bullet and bought a beautiful monstrous beast of a machine from Twin Ports Cyclery (one of The Reader’s faithful advertisers) and very quickly fell madly in love.

I also quickly learned there is a divide between traditional bikers and e-bikers, who, the trads say, are cheating with their motors.

I get that. But after two months on my Yosemite 700 made by Stone Mountain Bike Co. of Duluth, Ga., there’s no cheating here.

Yes, my beautiful beast has a throttle that can take me close to 30 mph without touching a pedal, but who wants to do that?

With pedal assist engaged, I can clip along at a pretty good speed depending on what level (1 to 5) I’m on, but you’ve got to pedal to get that speed and you are definitely getting a good work out with your legs and your upper body as you ride and push this 70-plus pound beast.

I can tell just by how baggy my winter-sized trousers have gone since doing my 20-mile daily commutes these past two months. And I can make the commute in less than half the time it takes by my purely leg-powered bike, which I still use for the commute on nice days and for pleasure riding.

But you cannot beat the e-bike for the commute. I am in love with this mode of transportation, and I do not care if anyone thinks it is cheating.

I’ve earned my e-bike. I think everyone should aspire to an e-bike of their own. Soon.