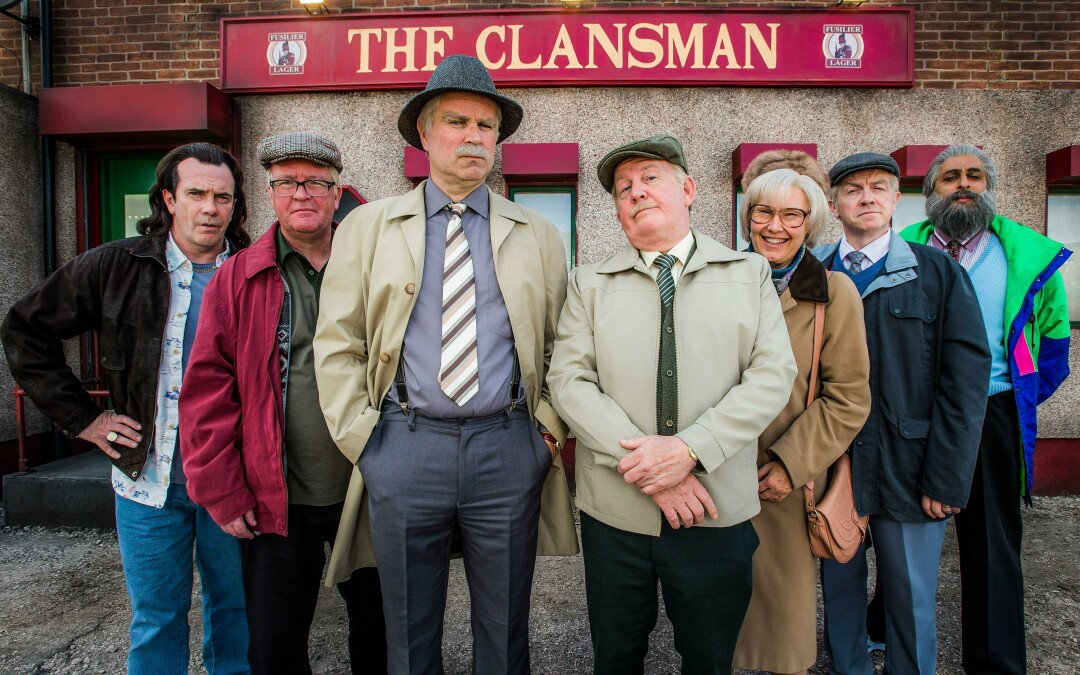 The main characters in the Scottish comedy Still Game, from left, Boabby the barman, Winston, Victor and Jack, gossip Isa, tightwad Tam and Navid the shopkeeper.

OK, you might need closed captions for this one, and even then, some of the Scottish vernacular of this BBC comedy might be beyond yer ken. But I guarantee it’s worth wading into this inner-city Glaswegian comedy that revolves around a pair of lifelong pals and their circle of oddball friends and acquaintances because though it takes place in a world far away from us, the comedy is universal.

All nine seasons of the series that ran from 2002 to 2018 are available on Netflix.
Comedians Ford Kiernan and Greg
Hemphill star as gritty, mischievous septugenarian widower pals Jack Jarvis and Victor McDade. The two characters began life – along with another of their pals, Winston (played by Paul Riley) – as a stage play in 1999, in which the three men discuss a variety of topics while stuck in an elevator.
Jack and Victor appeared again in Kiernan and Hemphill’s comedy sketch
show Chewin’ the Fat (it used to be available for streaming but no longer is; catch it on YouTube).
Among Jack and Victor’s pals are an assortment of quirky characters such as their feisty, eventually one-legged pal Winston; Tam, the extremely lucky and stereotypical Scottish tightwad who takes the word to new heights; Navid, the sharp-tongued shopkeeper and his never-seen even sharper-tongued wife Meena; Boaby the barman of the local, The Clansman, and constant butt of jokes; and local gossip Isa.

Peripheral characters such as the lovable, big-toothed drug addict Methadone Mick, boozehound Pete the Jakey, large-eared Shug, Stevie the Bookie and the monstrously ugly Edith pop up with regularity to help complicate whatever problem Jack and Victor are trying to extricate themselves from, because, after all, it is a situational comedy.

In an interview Hemphill did with BBC Scotland, he explained the genesis of the characters: “We set out to write characters that we thought we’d like to be like when we were that age, up to mischief, up to no good, characters that your grandkids would love – mischief-makers.
“Ford and I started thinking about the secret lives of pensioners and what happens when the children aren’t there. We had a lot to say about them, especially how they shouldn’t be ignored.”
It all takes place in the fictional Glasgow suburb called Craiglang. Jack and Victor live a life of routine – a trip to The Clansman, a stop at the bookies and Navid’s shop.
Jack and Victor have adjoining council flats on the 14th floor of Osprey Towers.
It made history in the annals of British comedy for both its location and the characterizations.
Why do these characters mean so much to people? Because we know these people. They live. They exist.
So beloved was it that upon its final episode in 2019, the following motion honoring the show was made in Parliament: “That this House celebrates the cultural impact of BBC Scotland sitcom Still Game following the broadcast of its final episode on 28 March 2019; acknowledges that Jack and Victor have moved on from Osprey Heights, Boaby the Barman has pulled his last pint in the Clansman, Tam has no more pennies left to pinch, Winston has placed his last bet with Stevie the Bookie, Isa has no more gossip to spread throughout Craiglang, and Navid has even sold out of pineappleade; recognises the longevity of the show’s success from its origins as a stage play in the 1990s, to its sixty-two episodes broadcast from 2002 until 2019, and its run of 21 sell-out shows at Glasgow’s SSE Hydro in 2014; notes that Still Game won multiple BAFTA Scotland awards including Best Entertainment Programme, Best Television Performance, and Best Actress, and was nominated for Rose d’Or and National Television awards; congratulates its creators Greg Hemphill and Ford Kiernan for creating iconic characters, bringing generations together, and providing hours of laughs; and wishes the cast and crew all the best for their Final Farewell live shows later this year.”

That final episode is amazing and teasingly poignant. It also emphasizes that there will never be a reboot.
Jack and Victor decide they will take a walking trip up Ben Lomond (Beacon Mountain).
As they begin the ascent, Jack asks, “Do you think they’ll know where we went?”
And Victor replies: “They’ll know where we went.”
Then Jack and Victor fade from the screen, as does each of the other characters, representing the passing of time and the fact that life goes on without people we have come to know and love.
You might have to do a bit of work to understand what they are saying, but it’s worth it.
To help you get through this brilliant comedy series, here are explanations for some common Scottish slang:
Aye Right: Yeah, right. A phrase used when you don’t believe something that you are told.
Yer aff yer heid: You’re off your head – a little bit daft.
Pure dead brilliant: Really good.
Whit’s fur ye’ll no go past ye: What ever will be, will be.
Awa’ an bile yer heid: In English is “Away and boil your head.” It really means “get lost.”
Haud yer wheesht: Be quiet.
How’s it gaun?: How are you doing?
Yer a chancer: You’re pushing your luck.
Taps aff: T-shirts off. To remove one’s shirt due to the slightest hint of sunshine.
Geein me the boak: That makes me feel sick.
Yer at it: You’re talking nonsense/Your’e acting like an idiot.
Mad wae it: Being very drunk.
Yer clatty/Yer mingin’: You’re dirty/disgusting.
Yer talkin’ mince: You’re talking rubbish.
Gonnae no’ dae that!: Please don’t do that.
No ah umnae: No I’m not.
Braw: Good looking,
Claes: Clothes
Geggi: Mouth
Geks: Glasses
Gutties: Shoes
Lugs: Ears
Tassie: Cup
Yaks: Eyes
All his eggs are double-yoakit: He’s full of rubbish
Bampot: A mad idiot
Dafty: Fool
Eejit: Idiot
Heid-the-baw: Idiot
Walloper: Idiot
Fandan: Pretentious idiot
Roaster: Someone being an idiot
Get tae: Go away
Glaikit: Stupid
Haud yer wheesht: Be quiet
Mink: Dirty person
Rocket: Annoying or crazy person
Sook: Soft
Bahookie: One’s backside
Bawbag: Scrotum
Bawhair: A pubic hair; typically used to indicate a very short distance
Cludgie: Toilet
Pished: Drunk
Blootered: Drunk
Oot yer nut: Drunk
It’s a sair ficht for half a loaf: Life is difficult
Jings: Wow
Ken: To know
Nae danger: No chance
Patch: To ignore
Scunnert: Bored, fed up.