‘Truckin’, got my chips cashed in’

Jimmy Hase found the meaning of life in a food truck 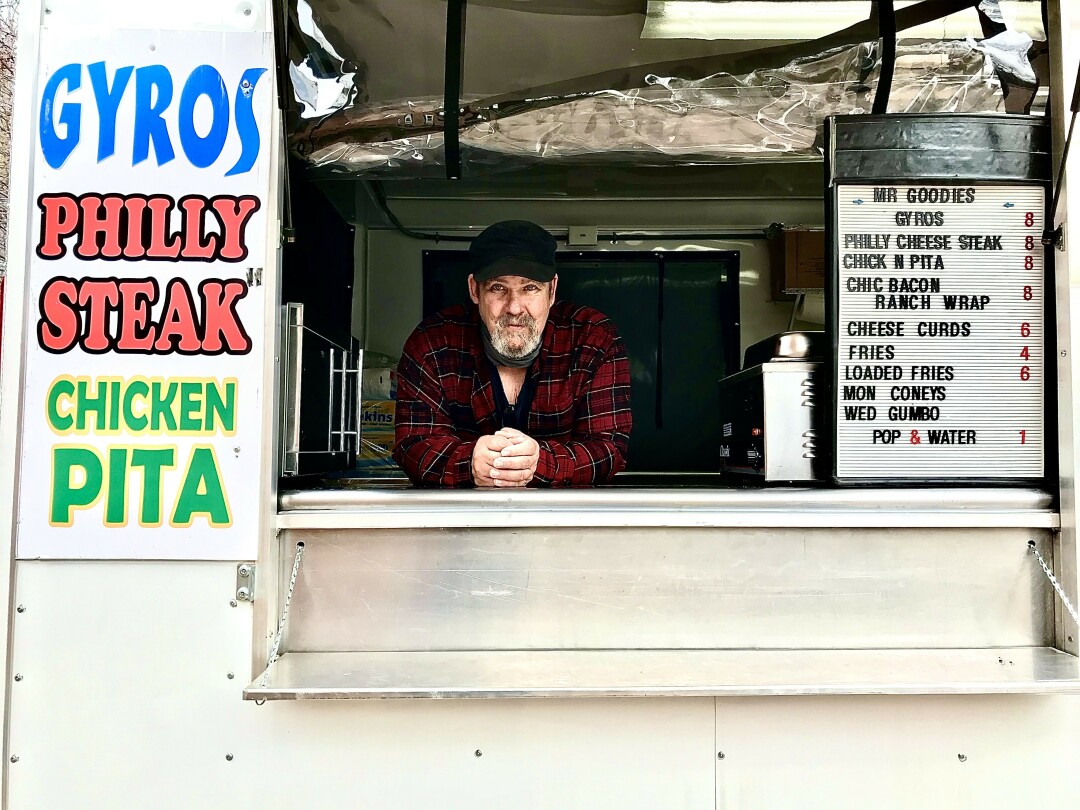 While working one beautiful summer day at Bridge’s Bar in Lake Nebagamon, a customer suggested that Jimmy Hase would be a much happier man if he could be out in the glorious sunshine, serving as his own boss in command of a food truck.

The journey began for Hase – who is also a bass player (fans of the Superior-based Dusty Rose Band may remember him as the bass player for 31/2 years when the band had a regular gig at the Lamplighter) – when a musician friend driving through Spooner spotted a food truck for sale. Hase bought it from the guy in Spooner, who usd it to sell hot dogs and lemonade at auctions.

“It wouldn’t pass code, so I tore it all apart and put it back together,” he said. “I used it that one summer and had so much fun. We didn’t make much money that first year, but I invested the money because I knew the potential was there. In the spring of ’94 I bought another trailer. It’s my pride and joy. It’s a ’94, but it looks like it’s brand new, just because we really take care of our stuff.”

When he says “we,” Hase refers to his business partner, Carol Mattson.

“She’s almost like part owner,” he said. “She’s been with me from the first. She’s really a hard worker. It’s just her and I, and we split the money up pretty much. We’re like family. A lot of times I’m gone for a week at a time and she’s with me. So her husband calls me the summer husband. He’s the winter husband and I’m the summer husband.”

The pair has developed a circuit of festivals and events throughout the region they return to each year, as well as adding new places along the way.

“The same people come back all the time,” Hase said. “I like that. It’s fun to see them. It’s almost like you’re waiting to see them, you know, all these people who come to the wagon at festivals. It’s pretty cool. People in bars can be ornery. You have to babysit them. In the food business, you just have happy customers. Very rarely do you see any unhappy customers. It’s fun to see people having a good time, and I never have to worry about being a bartender with people fighting and stuff.”

From the start, Hase’s food truck has been called Mr. Goodies.

“As a kid, I always loved the Mr. Goodbar candy bar, so I called it Mr. Goodie’s,” he said. “It just took off. It was so much fun. I could play in a band in the winter time and I could do this in the summer time.”

And he did for every summer since 1993. In the meantime, the food truck business has grown into a billion dollar industry.

“I’m seeing a lot more competition,” he said. “I’ve been doing it for so many years. You get a lot of guys who come in and get a taste of the fun. They look at what other people are selling and they want to do the same thing. It hurts everybody. I’ve seen a lot of them come and go. They start out and it’s a lot of fun, but they can’t keep up with it.”

Last year when shows and events began shutting down, Hase was looking for a way to pick up the slack when he contacted the man who was the first customer the first time Hase sold from his food truck, Jim Ronning, owner of Hudy’s Bar in east Superior.

“I asked Jim if I could try the food truck at his place,” Hase said. “He has music and just loves to have fun. He put in power, one for the band and one for me. Whenever he has a band in the parking lot, whenever I can do something for him, I do.”

That has turned into a regular lunchtime gig. You can find Mr. Goodies Food Truck at Hudies from 11 am to 2 pm weekdays beginning the first week of May.

Hase is proud of the food he serves and the sourcing he does for that food. While he said the menu can vary depending on where he and his truck are – it might be Mexican one day and Greek another – generally you will find him serving gyros, Philly cheese steak, chicken sandwiches, fries and fried cheese curds (“We sell tons and tons of deep-fried cheese curds,” he adds). He can do a veggie gyro for those who eschew meat.

Those gyros come with a homemade tzatziki sauce that Hase is proud to share with others, even when they might have gotten a gyro from another vendor.

“Oh, yeah,” he said. “I’ve had people come with gyros they bought somewhere else, asking for my sauce because all they got was sour cream.”

On Mondays he does coneys and on Wednesdays he does a gumbo taught him by his chef nephew Tom Moore.

“My nephew taught me how to cook. He went to school for it,” Hase said. “He developed the gumbo recipe.”

Hase said he definitely has the sense that things are coming back to life this summer.

“It seems like things are getting back to normal. I’m booked up for the whole summer,” he said.
And that excites him.