The monsters we need 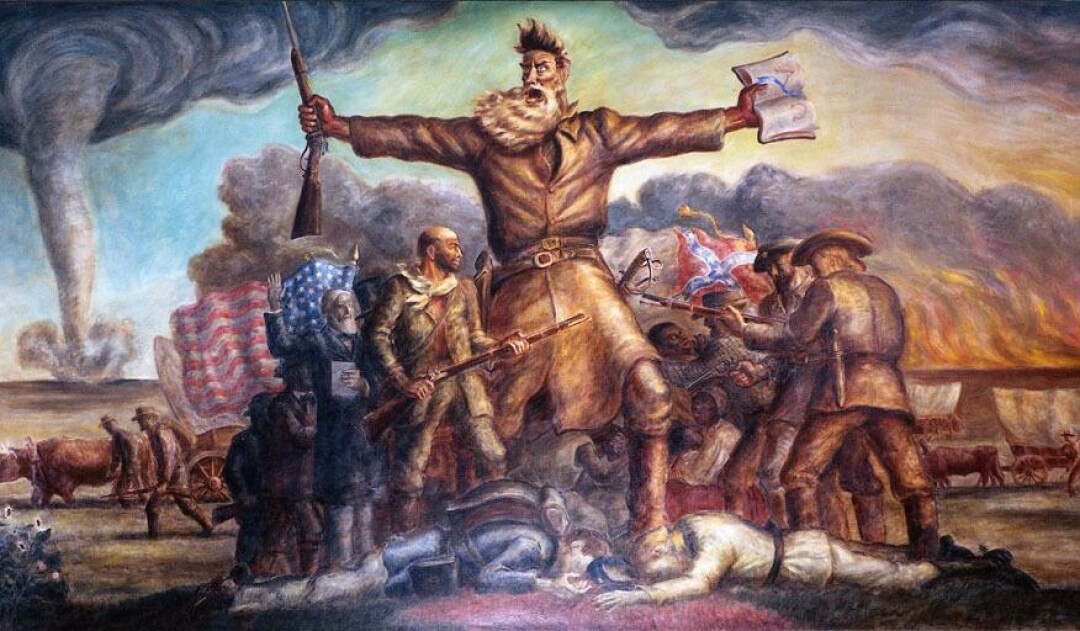 Tragic Prelude, a mural completed by John Steuart Curry in 1937, now hangs in the State Capitol in Topeka, Kansas.

I was born in the cradle of the Republican Party – Kansas.

Despite my 55 years residence in Mayonnaise Minnesota, I think my birthright gives me a better handle on today’s Republican party than Canadian-born columnist David Brooks.

He’s not wrong. In a dire NY Times column, Brooks tells of a January poll. It asked if politics is more about “enacting good public policy” or “ensuring the survival of the country as we know it.”

Democrats answering the question chose policy but not Trump Republicans. They chose fear. Fifty-one percent of them said politics is about survival. And that doesn’t mean global warming or surviving a pandemic.

That might have shocked our founding fathers, who wrote a Constitution to ensure a government that would act under the assumption that all men were created equal, since amended to include women and formerly enslaved men. We even fought a Civil War to make it thus.

That was then. Brook’s quoted today’s Trumpian Jack Kerwick who wrote, “The good man must spare not a moment to train, in both body and mind, to become the monster that he may need to become in order to slay the monsters that prey upon the vulnerable.”

Does Mr. Kerwick mean that the American soldiers who landed on Omaha Beach and liberated Dachau were our equivalent of the Nazi SS?

Or a little closer to home?

Is Kerwick making a distinction between George Floyd and Derek Chauvin?

If so, I wonder which man would be which monster?

I fear the answer is black and white.

The Kansan in me wonders what Mr. Kerwick would make of John Brown, who killed a Kansas family in cold blood for supporting slavery and later went to the gallows after trying to start a slave revolt in Harper’s Ferry, Virginia.

If Mr. Kerwick visited the Kansas State Capitol he would see how Republican Kansas honored Brown in the mural my mother saw painted during her visits to her father, George Robb, in the state Auditor’s office.

The Robb family’s neighbor in Assaria, Kansas, Larry Lapsley, was a slave who escaped through rebel territory during the Civil War to reach freedom in Kansas.

At Lapsley’s death, great grandfather Thomas Robb, a man proud to call himself a “black Republican,” the equivalent of a “N----- lover,” helped prepare his neighbor for burial. He returned home in a dark mood and ever after refused to talk about what he’d seen. My grandfather suspected that Larry had been castrated by his owners.

Castration, servitude, Jim Crow and mass incarceration have made some white Americans feel safer. This sorry history goes back before the 1830 slave revolt led by Nat Turner. After slaughtering slaves in revenge Virginia made teaching them how to read and write a crime.

But in Kansas the monster, John Brown, stands defiant under Topeka’s capitol dome.

George Robb opposed America’s sticking its nose in the wars of other nations. He had only voted for Democrat Woodrow Wilson because of his promise to keep American soldiers out of European trenches.

And yet he volunteered when war came and found himself leading black soldiers called the Harlem Hell-fighters. After the blood and dust settled my Grandfather was awarded the Congressional Medal of Honor. With these laurels he was appointed to fill the vacant post of Kansas Auditor. He never again made the mistake of voting for a Democrat.

But as much as he opposed them he couldn’t help but like Harry Truman. After fighting in the trenches he surely thought Truman’s integration of the Armed Forces was long overdue.

Kansas put John Brown in the Capitol but the state was fainthearted about race. It segregated its elementary schools but not its high schools.

When she was sufficiently mature my mother sat side by side with black children. Even then Topeka High kept separate black and white sports teams, separate principals and stopped building a swimming pool in its basement when Topeka realized that children of all colors would swim in its waters.

Two years after my birth Kansan Dwight D. Eisenhower became president as a Republican. Ike’s choice for Chief Justice of the Supreme Court, Earl Warren, fashioned a unanimous decision on the court’s most tumultuous decision of the 20th century – Linda Brown vs. Topeka Board of Education.

From John Brown to Linda Brown, Kansas has led the nation.

Because of it I sat side by side with African American children in elementary school. I doubt that Derek Chauvin or Mr. Kerwick have ever had such an experience.

Officer Chauvin’s suburb has but a 6 percent black population while his job was to over-police Minneapolis’s black population, stopping people for petty offenses like being too poor to pay court fines or for failing to put on current license tabs in a timely fashion.

And what white cop who had never grown up with black kids wouldn’t be nervous about policing black men half of whom had prison records in a nation awash with NRA protected guns.

It seems Derek Chauvin became the very monster Mr. Kerwick warns us we will need more of.

Harry Welty is a black Republican who charges at lincolndemocrat.com.