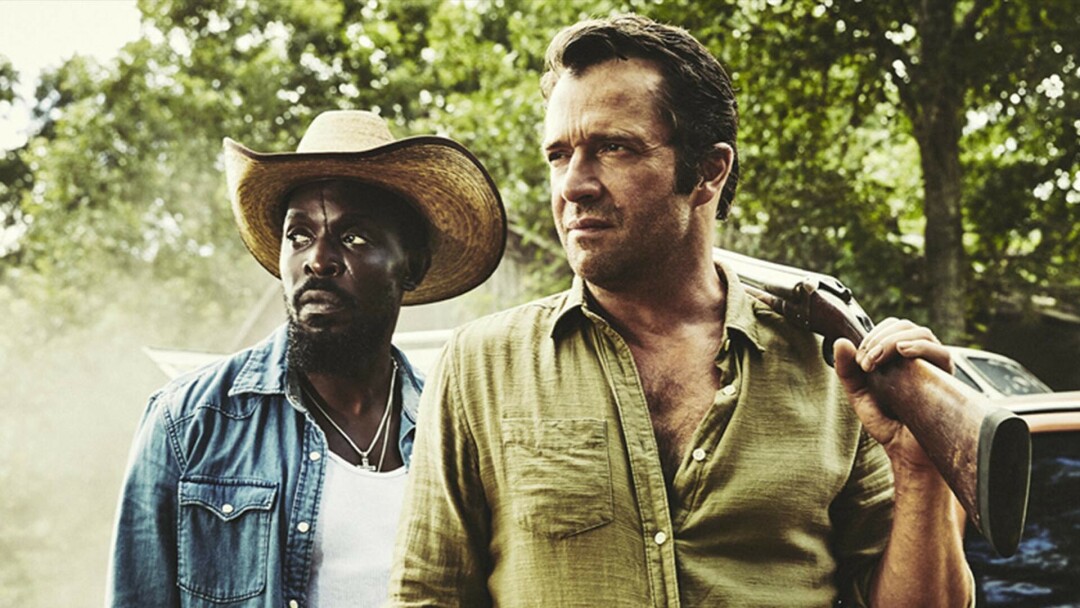 A couple years back I was badly in need of a good streaming series to absorb me, and quite by accident found a former Sundance Channel series called Hap and Leonard (2016-18). It caught my interest because I had just recently discovered the Hap and Leonard series of books when I had a long drive to make. For that drive I bought at my local library a recycled multi-disc audio book by Joe R. Lansdale called Bad Chili – the fourth book in the Hap and Leonard series – featuring a most unlikely pair of private investigators in neo-noir East Texas.
Why unlikely? Hap Collins is a draft-dodging, gun-hating heterosexual white male, and Leonard Pine is his lifelong chum, a bad-tempered Vietnam veteran who is black and gay.
Bad Chili made the long, boring drive much more palatable, and Lansdale had a new fan.
It wasn’t the first time I’d heard his name. The man is prolific, having written short stories, novels, comic books and TV. And his work is immensely filmable, as in the 2002 Bruce Campbell movie Bubba Ho-Tep.
I first came across him in a 1987 collection of short stories called The Black Lizard Anthology of Crime Fiction, The brief bio accompanying his story, “The Pit” reads: “Joe R. Lansdale has written so well in so many genres publishers aren’t quite sure how to categorize him…”
That remains the case today, as I found out.
But first, more on the series, starring James Purefoy (Mark Antony in the series Rome) as Hap and Michael K. Williams (Omar Little in The Wire) as Leonard.
When I came to the end of the three-season series, I felt as though I had lost two good friends. Hap and Leonard are two good souls who are morally predisposed to make the world a little better place, often through unorthodox methods. They try so hard to do the right thing, even if it’s wrong by societal norms.

I was so sad to learn that the plug had been pulled after three seasons that I had to reach out to the prolific Lansdale. He responded almost immediately.
“There were some remarkable performances in that series,” Lansdale said. “James Purefoy and I were both saying, ‘Hell, we’ve got three great seasons. That’s something to be proud of’.”
Yes. Yes, indeed.
Putting faces to those two best friends was amazing. The premise is that these two East Texas guys grew up together. Hap is a white Vietnam War draft dodger who doesn’t like to kill anything. Leonard is a black, gay Vietnam veteran with anger issues and his own distinct sense of justice.
The first novel, Savage Season, released in 1990, begins with Hap shooting clay pigeons: the only kind of bird he likes to shoot these days. He never misses.
“Hap is a lot like me,” Lansdale said. “I used a lot of my background and my past for his past and his background. I tweaked it in a slightly different direction. Leonard is based on a number of people.”
How, I asked, is Hap like you?
“He’s a little older than me in the early books,” Lansdale said. “Now I’m older than him. I had to slow down his aging. I did that by not counting the years between books. I did eight years between novels once and another time four or five years. I used the fact that I was a Vietnam War resister. I used the fact that I was very much a ’60s kind of guy, although I was never anybody involved in drugs. I don’t smoke cigarettes; I don’t drink alcohol. But I was a bit of a tough guy. You kind of had to be in that era, especially if you had hair nearly down to your waist. So a lot of that is based on that. A lot of the jobs he and Leonard do, I’ve done most of that – rose fields, a little bit of bouncing. I’ve worked in chair factories. I was a janitor for six or seven years. And I worked for Goodwill Industries as a transportation manager and PR guy for a little while.

“I’ve done a lot of different stuff, so I’ve tried to give that background to them,” Lansdale continued, “but I’ve tried to evolve them, so that if you’ve read the books – and you don’t have to read them in order, which is a great thing – but if you’ve read them in order, you’ll see that they’ve gradually progressed in their lives where they’re not living on a shoestring anymore. That sort of mirrors aspects of my life, so that’s how Hap would be like me.”

Lansdale served as co-executive producer of the Hap and Leonard TV series.
“I always say, because of that, I got to say whatever I wanted to say, but they got to do whatever they wanted to do,” he said. “But I liked it. I thought they handled it very well. I was very pleased. As a writer you always have some complaints, but I’ve got more praise than I have complaints – by far.”

The series was written and developed by Jim Mickle and Nick Damici, who had previously worked with Lansdale on the 2014 film of his noirish novel Cold in July, which starred Michael C. Hall, Sam Shepard and Don Johnson in a scene-stealing role as a red Cadillac-driving private detective/pig farmer.
“I was very pleased with it,” Lansdale said of the Cold in July film.
The Hap and Leonard series is set in Lansdale country – East Texas.
“I didn’t want to be a regional author, but I was an author writing within a region; therefore, my characters were regional in a sense, but I never wanted to be specifically a Southern writer or an East Texas writer,” he said.
The idea for the unlikely pair came to Lansdale as an answer to a writing subject he had always wanted to tackle.
“I’d been wanting to write something about the early ’60s and ’70s, when I was a teenager and young man. I had never been able to quite figure it out because I was trying to do it so directly,” he said. “When I started writing this crime novel, Savage Season [the first of what became the Hap and Leonard TV series], those elements came out. I never expected it to be a series. I wrote the single, and then I moved on.

“But a few years later, I couldn’t get Hap’s voice out of my head because it’s my voice. So I started writing more stories about them. Of course, I’ve interspersed that with standalones in a variety of different genres. But I always return to them. They’re fun characters, and I like them. They’re a way I can make social and political comments and humanity comments and also write something that is very intriguing and lots of fun to read and exciting.”

One of the hallmarks of the series is the snappy dialogue and wisecracking, especially between the title characters.
“I’ve always liked dialogue,” Lansdale said. “When I was growing up, people were always trying to top the other guy. I would remember all of that. People say, ‘Well, people just don’t do that.’ We do quite a bit in East Texas, especially if you know each other really well. Or if you don’t like someone. That can be it, too.

“But I borrowed that, and, of course, I heightened it. Of course it’s not about how people really talk. It’s about the illusion of how they really talk. A lot of what I have there is just the stuff I heard from my dad, I heard from my friends, I heard from people growing up. They’re Texanisms or Southernisms or East Texanisms. Those three are a lot of what I use because I heard those. There are others you naturally invent and play off of due to the attitudes you built from the original stuff.”

Lansdale points out that for those who don’t know East Texas, it’s vastly different from the image most may have of Texas.
“Even though people think of Texas as wide-open spaces, East Texas isn’t like that,” he said. “It’s woodsy and rivers and lakes. It’s more like Arkansas and Louisiana, but no mountains. We have swampy water, but nowhere the degree you have in Louisiana. We have the same wildlife – alligators, snakes, birds. It’s more tropical than Southwestern in the way you normally think of it. The culture is somewhat influenced by the Southwest, but it’s more influenced by the South. It’s a unique place.”

And perhaps that’s why he has created two such very distinctive characters who clumsily solve crimes.
“I wanted to do something a little different,” Lansdale said in explanation of Hap and Leonard. “I was trying to write stories that came out of my background, and I was fortunate that they came together rather well and that these characters impacted people a lot. Over the years they’ve grown in popularity, and, of course, the TV show didn’t hurt them any.”

Even though the TV series came to an unfortunate end after covering the first three books in the series (Savage Season, Mucho Mojo and Two-Bear Mambo), we haven’t heard the last of Hap and Leonard. The 12th book in the series – The Elephant of Surprise – was released in 2019, and a short story collection, Of Mice and Minestrone, was released last year.

Lansdale also has two episodes – “Fish Night” and “The Dump” – in the Netflix animated series Love, Death & Robots, created by Tim Miller (Deadpool) and David Fincher (Seven, Fight Club and more).
And, finally, Lansdale worked with son Keith and daughter Kasey on a story called “The Companion,” which has been adapted as an episode for Greg Nicotero’s (The Walking Dead) Creepshow, which recently appeared for streaming in Amazon.
“We’re happy and excited about that,” Lansdale said. “I’ve known Greg for many years. And there’s a ton more films coming, more books coming.”
Stay tuned!