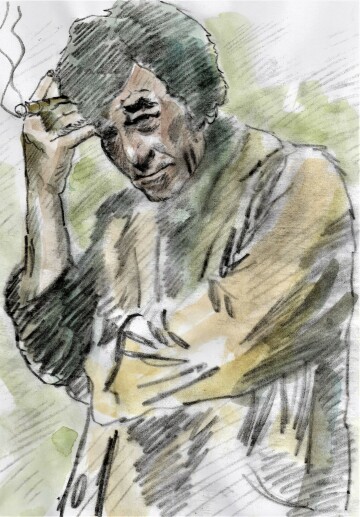 I have become obsessed with the ’70s crime drama Columbo, starring Peter Falk as the titular character. The original run of the series from 1971-1978 is currently being broadcast on Sunday nights and, provided I can pry myself away from my duties as a husband and parent, I like to settle down and lose myself for a couple hours a week in this quirky treasure.

I often get bewildered looks when I enthusiastically ramble on about the previous night’s episode to friends and co-workers, who probably think my interest in the show stems from a sense of irony or camp, but this is not the case. I truly enjoy the show.

At first I worried that I was the only geek trapped in this nostalgic time warp and that, due to poor ratings, the network would realize their folly and cancel the show. These fears subsided when I found evidence that I’m not the only person wasting my precious time reveling in Lieutenant Columbo’s escapades.

The first clue presented itself in an interview with Sarah Silverman on one of the late night shows, in which she admitted that she is a big fan of the show, too. I take that as solid proof that there are, at minimum, two of us tuning in each week. The next hint at a broader cultural interest is a line of t-shirts available for sale on the station’s website. By my reasoning, there’s no way a network is going to shell out good money to print four different t-shirt options to promote a show that nobody’s watching.

That got me thinking about what makes the show so compelling, and the resulting conclusion is that Columbo is a perfect fit for today’s television audience. Here’s why:

Reason one: We’re suckers for nostalgia. It gets us right in the guts, and Columbo is just packed with ’70s vintage decor, cars and clothing. Big collars, flared pants and brown ties. It is enough to swing you right out of your modern streaming service and land you back in simpler times, when sound and lighting methods were still rough around the edges and special effects played second fiddle to acting and screenwriting.

The guest stars appeared from a bygone era of movies and TV shows we forgot we even missed. Leonard Nimoy, Patrick McGoohan, and my favorite guest, Dick Van Dyke, were all seminal stars in their own genres, but generously lent their talents to the NBC Mystery Movie as arrogant, premeditating murderers.

Reason two: The format. Columbo uses a different format than most other detective stories. We (nearly) always see the murder being committed before the first commercial break, long before the eponymous hero of the show even makes an appearance. The purpose this serves is to let us know who the killer is right off the bat, so we can sit back and enjoy the show without troubling ourselves with the chore of trying to figure out the answer to some riddle.

I think we can all appreciate this approach, especially in these strange times of pandemic and political upheaval. There’s enough stress and uncertainty in our real lives, we don’t need it in casual entertainment. There’s a certain comfort in knowing how the show is going to end. The murderer made one minor oversight, left one small clue, and Lieutenant Columbo is going to ask some personal question that will trip up the villain and lead to a full confession. Our hero will come out on top again, just like last Sunday, and god knows we need that routine comfort right now, even if for just two measly hours a week.

Reason three: The hero. Peter Falk perfectly portrays a hero with virtue, humility and fortitude. An affable cop who always snares his prey but never revels in his grim victory. Everything that we are bludgeoned with from cable television, political podiums and Twitter accounts is completely absent from the protagonist at the center of this series.

Can you imagine the police, or even our ex-president, using self-deprecation as a tool to elicit the truth from unsavory actors? Probably not. Columbo, on the other hand, lets the antagonist of the story brush him off, even gloat, as he quietly compiles evidence of method, motive and opportunity to build a bullet-proof case against them.

Here is a hero of the screen unlike any of those foisted on us by today’s over-stimulated production teams. He doesn’t single handedly beat up evil hordes using mixed martial arts. He doesn’t kick in doors with his pistol drawn or jump through glass windows. Columbo just fumbles in his coat pockets looking for a match. Sometimes he asks to borrow the telephone to call his wife while he calmly, politely and observantly deconstructs the crime.

No superpowers or false bravado, just an honest man doing his job with earnest dedication. He’s the cop we wish we could see on the 10 o’clock news or read about in the paper. A nice guy that we can all look up to, who we can trust to serve and protect without resorting to threats of violence.

We’ve been bludgeoned and beleaguered by the false virtues of power and vanity, witnessed the end of the American Era as depicted by boorish action adventures and self-important network dramas. It’s nice to sit down and watch a good person do something right for a change, and that’s the reason I think Columbo is such an appropriate program for today’s audience.

So, if you find yourself at home on any given Sunday evening with nothing in particular to do, take a couple hours and tune in to the quirky charm of America’s most refreshing anti-anti-hero. Buy the ticket and take a ride down memory lane, where all the cars are big, all the counter tops are Formica, and all good cops wear raincoats.