With the start of baseball, it’s time for some Twins history 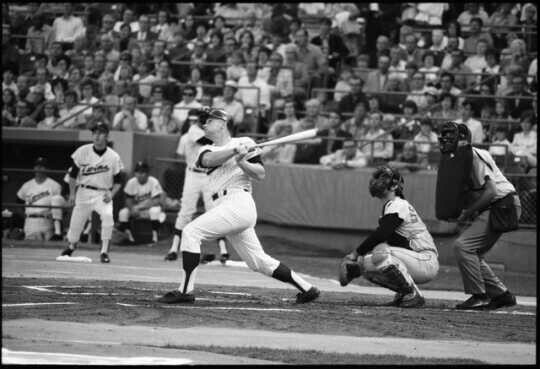 Slugger Harmon Killebrew hits his 500th home run during a game against the Baltimore Orioles at Metropolitan Stadium in Bloomington, Aug. 10, 1971.

The Minnesota Twins – the first franchise from Minnesota to compete in Major League Baseball (MLB) – made their debut in the 1961 season.

Calvin Griffith, owner of the Washington (D.C.) Senators, received permission to move his baseball franchise to the Twin Cities on Oct. 26, 1960.

The relocated ball club was named the Minnesota Twins in honor of the Twin  Cities (Minneapolis and St. Paul), and the team competed in its inaugural MLB season in  1961 as a member of the American League.

The team’s first logo featured two figures, christened “Minnie” and “Paul,” shaking hands across the Mississippi River. In a nod to Minnesota’s Minor League teams, Minnie sported a jersey with the Minneapolis Millers’ “M,” while Paul wore a jersey featuring the “STP” of the St. Paul Saints. 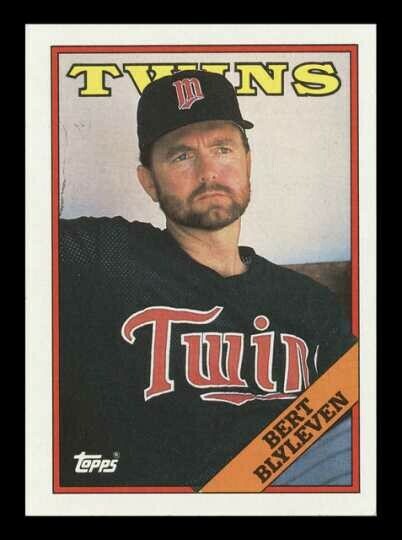 Though they finished seventh out of 10 American League teams in the 1961 season, the Twins improved as the decade progressed. Led by manager Sam Mele, they finished first in the American League in 1965 with a record of 102-60 and squared off in the World Series against the National League champions, the Los Angeles Dodgers.

The series went to a deciding Game Seven, played at Metropolitan Stadium, which featured the Twins’ Jim Kaat dueling with Dodgers pitcher and future Hall of Famer Sandy Koufax. The Twins fell to the Dodgers by a final score of 2-0 and would have to wait for over two decades for their next World Series appearance.

In the next two decades, despite the efforts of Harmon Killebrew, Rod Carew, Tony Oliva and a young Bert Blyleven, the Twins reached the postseason only twice, in 1969 and 1970.

The organization changed ownership for the first time in 1984, when businessman Carl Pohlad purchased the club from Calvin Griffith for close to $44 million. 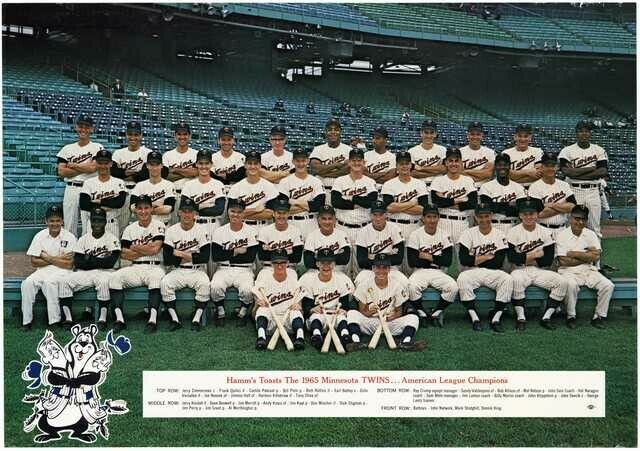 Photograph of the 1965 Minnesota Twins used as part of an advertisement for Hamm’s Beer. Below, a Hamm’s Beer placemat with a calendar of the 1960 season.

The 1987 season saw the Twins, led by 36-year-old manager Tom Kelly, finish with an AL West record of 85-77 behind their young core of homegrown talent and a recently returned Bert Blyleven.

Having won their first pennant, they advanced to the World Series, where they faced the St. Louis Cardinals. The Twins seized their first World Series title in a decisive 4-2 Game Seven victory on Oct. 25, 1987, in front of 55,376 spectators at the Hubert H. Humphrey Metrodome.

The Twins returned to the World Series in 1991 in improbable fashion after finishing dead last in the American League in the 1990 season. They found success by way of dominant starting pitching from the trio of Kevin Tapani, Scott Erickson and St. Paul native Jack Morris; offense was provided by free agent signee Chili Davis along with Shane Mack, Kirby Puckett, and 1991 Rookie of the Year Chuck Knoblauch.

In what is considered by many to be one of the all-time-greatest World Series, the Twins defeated the Atlanta Braves in a best-of-seven series, in which three games were decided in extra innings.

Game Seven featured a pitching contest between two Hall of Famers, the Braves’ John Smoltz and the Twins’ Jack Morris, and Minnesota won 1-0 in the tenth inning on Gene Larkin’s walk-off single.
The Twins’ success in the early 1990s was followed by eight consecutive losing seasons, and by 2001, rumors swirled that the club would be con-tracted (dissolved).

Despite the uncertainty of their future, the 2001 Twins managed a winning record in Tom Kelly’s last season as manager, and then made their first postseason appearance since 1991 during the 2002 season.
From 2002 to 2004, under a new manager (Rod Gardenhire) and a core of players including Brad Radke, Torii Hunter, Johan Santana, Doug Mientkiewicz and Corey Koskie, the Twins won back-to-back-to-back American League Central titles. They failed, however, to advance past the American League Championship Series.

The winning streak of the early 2000s helped the club to avoid contraction, and the Twins continued to succeed throughout the decade – thanks in large part to the efforts of 2009 MVP (and St. Paul native) Joe Mauer and 2006 MVP Justin Morneau.

They struggled after 2011, losing more than 100 games in the 2016 season. In 2019, however, the team hired Rocco Baldelli as manager, finished with an AL Central record of 101-61, and reached the postseason.

Editor’s note: This article focuses on the Minnesota Twins iteration of the franchise (1961–present), and does not reflect the pre-Twins statistics and accomplishments of the Washington Senators (1901–1961). 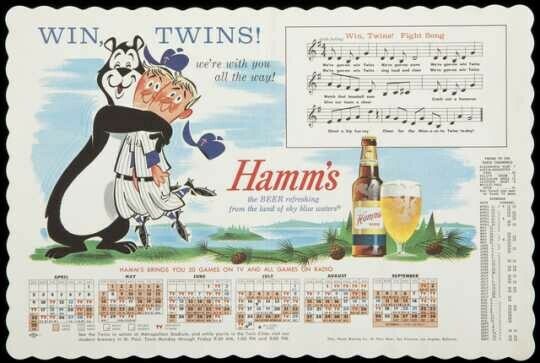 1960: Minneapolis is granted an expansion franchise tag on October 26.
1961: On April 21, the Twins play their first home game at Metropolitan Stadium against the Washington Senators. They lose by a final score of 5-3.
1965: The Twins make their first American League Pennant and first World Series appearance. They ultimately fall 4 games to 3 against Sandy Koufax and the Los Angeles Dodgers.
1965: Zoilo Versalles becomes the first Minnesota Twins player to win the American League Most Valuable Player (MVP) Award.
1969: Harmon Killebrew wins the American League MVP Award after leading the league with 49 home runs and 140 runs batted in (RBI).
1977: Rod Carew wins the American League’s Most Valuable Player Award after leading the league in hits, runs, and triples. He also wins the batting title with a final .388 batting average.
1982: On April 6, the Twins play their first regular season game inside the Metrodome against the Seattle Mariners.
1984: Businessman Carl Pohlad purchases the Minnesota Twins from Calvin Griffith for a price of close to $44 million.
1986: Tom Kelly is hired as interim manager on September 12. He replaces Ray Miller.
1987: At the Metrodome on October 25, the Twins claim their first World Series title by defeating the St. Louis Cardinals, 4 games to 3.
1991: At the Metrodome on October 27, the Twins claim their second World Series title by defeating the Atlanta Braves 4 games to 3 in what is considered to be one of the greatest World Series ever played.
1997: Brad Radke finishes with a record of 20 wins and 10 losses; as a team, the Twins finish with only 68 wins and 94 loses.
2002: In the midst of contraction talks, the Twins win back-to-back-to-back American League Central Division titles between 2002 and 2004.
2006: Pitcher Johan Santana becomes the first Minnesota Twins pitcher to be awarded a second American League Cy Young Award by leading the league with 19 wins, 245 strikeouts, and 233.2 innings pitched (Santana’s first AL Cy Young Award came in 2004).
2010: Target Field opens on April 12 in a home game against the Boston Red Sox. The Twins win by a final score of 5-2.
2017: Twins Center Fielder Byron Buxton is clocked with the “fastest inside-the-park home run” ever recorded in Major League Baseball history while he travels around the bases in a total of 13.85 seconds.
2019: The Minnesota Twins hit a Major League record of 307 regular season home runs.

This article is reprinted from Mnopedia.