On the front lines in Duluth 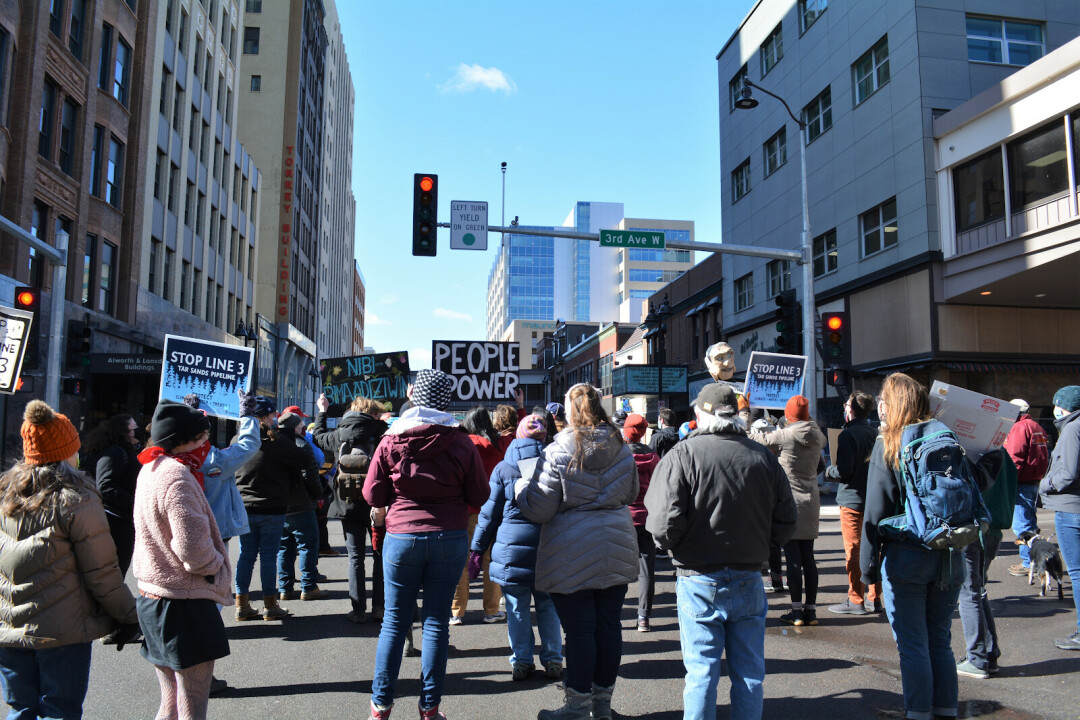 A few Sundays ago, I found myself in downtown Duluth, marching against Line 3 and then speaking at an environmental justice summit sponsored by the Minnesota Public Interest Research Group.

Throughout that day, and ever since then, I’ve been thinking about how all of us are on the front lines when it comes to fighting environmental injustice and addressing climate change.

Whether you’re a college student at UMD or St. Scholastica, a parent with three small children or a couple in your 60s, we are all on the front lines. None of us can turn our backs or walk away from the increasing number of significant climate events and their impacts upon our city and region; especially against those most vulnerable.

And from the moment we wake up in the morning until we lay our heads down at night, each of us is facing climate change no matter where we sleep or whatever we do during the day. To be on the front lines means we are literally standing and facing the various effects of climate change throughout our daily lives.

If you’re at the grocery store and checking out, you are on the front lines. Did you bring a canvas bag or backpack, or will you use the store’s plastic bags?

If you are wondering what to do with your lawn this year, you are on the front lines.

Are you looking for a new lawn-mower or have you thought about not growing grass and creating a natural ecosystem with native plants and trees? What you do with the lawn impacts the fight to build healthier environments to better support our local habitat.

Besides the personal choices we make and the individual actions we take each day, we are on the front lines with our families, our neighbors, our friends and our colleagues.

Collectively, we are constantly confronted with how to create a more resilient and sustainable city. And to do that, we often have to face and fight those individuals and institutions that don’t want to accept or acknowledge climate change.

In reading Michael Mann’s book The New Climate War, it’s become very clear that we are on the front lines fighting fossil fuel corporations, politicians and various media outlets that are trying to convince us that climate change is not real or as significant and threatening as most scientists have declared.

Mann talks about corporations like Exxon-Mobil and members of the Republican party who challenge the basic premise of climate change through various public relations and political campaigns. He writes about how these campaigns are “willing participants in a multipronged strategy seeking to deflect blame, divide the public, delay action by promoting alternative solutions that don’t actually solve the problem, or insist we simply accept our fate.”

On the front lines of our city, we are fighting U.S. Congressman Pete Stauber, who has challenged the nomination of Deb Halaad as the new U.S. Secretary of the Interior, and often dismisses the concerns of the indigenous and environmental communities.

On the front lines of our city, we are fighting the Chamber of Commerce that doesn’t want to recognize or have a conversation about climate change and its impact upon the business community.

On the front lines of our city, we are fighting Enbridge and the banks who are funding Line 3.

On the front lines of our city, we are fighting certain elected officials in our region who often rationalize why we need to slow down and take our collective time to address climate change.

In the latest issue of National Geographic, titled “The Fight For Clean Air,” the lead article talks about how pollution accounts for seven million premature deaths a year and can be harmful even at low levels.

Even 50 years after Congress passed the Clean Air Act, more than 45 percent of Americans still breathe unhealthy air. And in India, pollution “floats from a dizzying variety of sources” – including trash fires in streets where the garbage goes uncollected and families who burn plastic to cook and keep warm.

So, think about all the people around the world who are on the front lines fighting for cleaner air.

Here in Duluth, we need to be on the front lines every day. Fighting city hall to declare a climate emergency. Fighting to keep our lake clean. Fighting to help the most vulnerable populations in our city.