Growing up in Duluth vs. Cloquet 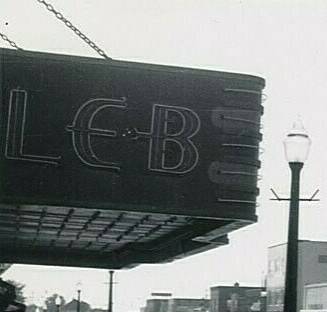 The LEB Theater in Cloquet

Jim Heffernan writes for that OTHER paper. He was retired for a long while, but now he writes a bimonthly column for them that I enjoy reading. He is a contemporary of mine, so we do have some things in common. The biggest difference between us is that, while he was growing up as a pampered big city boy, I was growing up in Cloquet, where kids had to be more rugged to survive.

He says that he listened to classical music as a lad, which means that his parents were wealthy enough to have a phonograph. For one summer, we had an old wind-up phonograph with a few old warped, scratchy records. It was a huge affair. I don’t know where my father found it, probably at the city dump. You used to be able to find a lot of semi-good stuff there before they started burying it. (A lot of people insulated their houses with the off-quality Balsam Wool the Wood Conversion Company dumped there, and so did we.)

The phonograph was too big to put in the house, so it had to go in our unheated porch, where it froze that first winter and never worked again. I’ll bet the Heffernans had a telephone and indoor plumbing, too. Maybe even a typewriter — lap of luxury, I’d say.

When he went to school or the public library, he just had to step on a bus. If he wanted to see a movie, likewise, a bus would take him to any one of seven theaters, and probably a couple in Superior if he dared venture that far from home.

We walked to our schools. My elementary school was one half-mile away, and the high school was closer to a mile. When I was in high school, for the last couple of years, they started sending buses out in the very coldest weather. We had to walk for several frozen days before the powers that be grudgingly decided to send them out, though, and they quit sending them as soon as it started to warm up.

The public library was about a mile and a half — no bus for that. In the summertime, I would walk there with an armload of books, swearing that the next time I would not take so many, but I always ended up carrying another armload back.

The nearest movie theater was the LEB, which was a mile away. The LEB played second-run films, old black and white shows, the old Roy Rogers, Gene Autry and Buck Roger serials and occasionally have a kid’s Saturday matinee with the Three Stooges, old cartoons, and comedy shorts with people like Joe E. Lewis. By the time it got to Lewis, everybody was just waiting for it to end, but you couldn’t leave early or you might miss something.

The Cloquet Theater (Later known as the Chief Theater) was two miles away. They played the first-run films, but you had to really want to see a movie to walk there. I saw “Psycho” there, and wished I hadn’t, and “Singing in the Rain,” which I saw three times. (I loved those old Hollywood musicals — no plot, perhaps, but enjoyable for the music.)

My father always told me that he saw Buffalo Bill Cody while they were in Superior. I thought he meant the Wild West Show before I found out that Bill’s sister lived in Duluth.

There is a picture of Heffernan on the website. He looks like a grumpy old man, same as me. I think I have a couple more strands of hair on top, but still not enough to run your fingers through. Still enough for bragging rights.

He says he liked the Three Stooges. I did not. He mentions Fibber McGee and Molly, which I did enjoy as a kid. I bought a cassette tape of their shows as an adult, and found them so bad that I couldn’t listen to the whole thing. Red Skelton is even worse — I used to laugh at him when

I was young (I was easily entertained) but he is cloying now.

He mentions Allen and Rossi. I remember them too, but not much of their material has stuck. I think I liked them. I liked Franken and Davis, too, for the little time they were together. Franken was still my favorite senator, too, by the way.

He didn’t know the difference between Lum and Abner. I had heard of Lum and Abner, but I don’t think I ever heard them on the radio, and I certainly wouldn’t have been able to tell them apart. I have found an old collection of radio shows from the ‘40s and ‘50s that has some Lum and Abner on it. It’s on cassettes, so I’ll have to power up an old cassette player just to see what they were about.

I would add Bob and Ray to the list of greats, though. They are still funny, too. So if he’s going to have his obituary say that he liked Laurel and Hardy, I won’t be afraid of having Bob and Ray on mine. It would be hard to pick their best routine, but I am partial to this one:

First cannibal: “You know I don’t like your brother-in-law.”

The one place where Heffernan and I agree is on the subject of raisins as food. I’m not entirely clear on whether or not he likes raisins by themselves — I like the occasional handful myself, but putting raisins in otherwise good food is a diabolical idea. I love cinnamon bread; I will often make a meal of it. but I HATE cinnamon raisin bread. Likewise. bran flakes are great, but not raisin bran. Putting raisins in sweet rolls ought to be a felony.

So keep the raisins in your fruitcakes (nobody actually EATS those, anyway, do they?) but leave well enough alone when it comes to the edible stuff.

In short, the Heffernan column is one of the bright spots in the DNT for me, and I hope he keeps writing as long as he wants to.