It can happen here 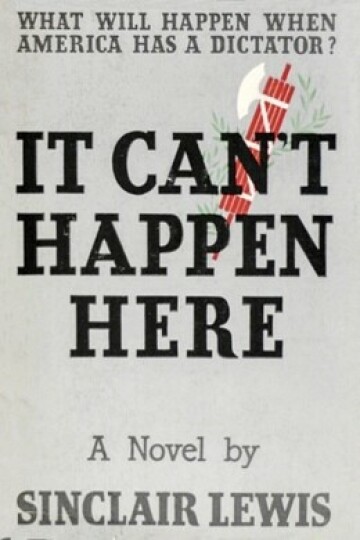 Maybe the prophet down on Interstate 94 was wrong

As a student of American literature I have read some of Sinclair Lewis’s many books: Main Street, Babbit, Arrowsmith, Elmer Gantry and It Can’t Happen Here come to mind.

Born in Sauk Centre in 1885, Lewis was evidently a troublesome Minnesota teenager because he tried to run away from home at age 13 to become a drummer boy in the Spanish-American War (Philippines, Cuba, Guantanamo Bay, etc.). He failed – but he was a young dreamer. He wrote romantic poetry and stories.

By age 36 he had published six novels. His novels were critical of what was happening in America. He was also interested in the subject of race and what modern working women did for a living.

In 1930 at age 45 he was the first American to be awarded a Nobel Prize for Literature. He was also awarded The Pulitzer Prize for Arrowsmith but declined the award for personal reasons. He traveled the world in restless fashion, spending a lot of time in Paris and other European cities. He was an alcohol abuser and died at age 66 in Rome of acute alcoholism. That’s a long way from Sauk Centre.

In 1935 Lewis published It Can’t Happen Here during the Great Depression because many European countries had succumbed to fascism, particularly Germany and Italy.

It’s a novel about the rise of a U.S. dictator-president using the methods and schemes of Hitler to gain power. Sound familiar?

In 1936 Berezelius “Buzz” Windrip, a very charismatic, power-hungry politician (actually modeled after Louisiana Senator “Huey” Long, the creator of “Share Our Wealth,” who was going to run against FDR in 1936 but was assassinated in 1935) promoted a return to patriotism and Christian values backed by paramilitary forces.

Both Hitler and Mussolini had support of such “militias.” Sound familiar?

Remember Lafayette Square and the upraised upside-down Bible? Who organized and led the attack on the Capitol? The Proud Boys, the Boogaloo Bois, the Oath Keepers, the Three Percenters, and many leaders of the anti-abortion industry.

An organization named the New Underground is formed to help loyal Americans escape to Canada and Mexico. Lewis patterned it after the Underground Railroad run by Harriet Tubman, the black abolitionist.

In the 1930s we had an America First organization that filled Madison Square Garden with Nazi supporters. My Little Falls neighbor Charles Lindbergh (at one time my parents lived a few blocks from the Lindbergh farm on the Mississippi River) was a big supporter of German culture and engineering expertise. Lindbergh was considered by many to be an engineering and aeronautical genius. Very few know that Lindbergh and a doctor friend were the first to develop a working artificial heart.

Windrip’s power finally evaporates when the economy fails to improve the lives of many Americans.

Many, including his vice-president, run to Canada and Mexico and he is deposed by a coup.
Lewis is actually saying in the novel fascism can happen right here.

Evidence grows that fascism is close to our street corner

Exhibit 1: Although science says we all came out of Africa with the same color, some Christians say colored people were born to serve whites – and the Bible says it’s fine to own slaves. (Did Adam and Eve have navels?)

Race continues to be a major problem in the Divided States of America (DSA).

When Hank Aaron reached the Major Leagues in 1954 with the Milwaukee Braves, Jim Crow was alive and powerful. When the Braves played Southern teams, Hank could not eat with his teammates in restaurants. He waited in the bus for a teammate to bring him hamburgers and fries.

After Hank tied Babe Ruth with 714 home runs, he had received more than 900,000 communications, most of them death threats: “Over 700 and you can consider yourself punctured with a .22 shell.”
“You can hit all dem home runs over dem short fences, but you can’t take dat black off yo face.”

Actually, it was a smile of relief. He had received several notes and phone calls saying when he hit #715 he would be shot and killed before he reached third base. That’s why he smiled in relief. He was still alive. His wife had kept her eyes shut in her seat on the third base side.

If we don’t solve our Black Lives Mat-ter problems and the killing of black men and women while our hearts are filled with the same red blood, fascism can happen here.

Exhibit 2: Amazon, the richest corp-oration in the world led by the richest man in the world, recently revealed its greed by being forced to pay $61.7 million to reimburse contracted Flex workers for stealing one-third of their tips when making deliveries of Amazon products.

The company had promised in 2016 they would receive 100% of their tips.

Do the 660 other American billionaires, who have added more than $1 trillion to their wallets in the 10 months of COVID-19, have any responsibility for the “common good” of the essential employees who have made the money for them?

Alabama Amazon employees who will soon vote on whether to join a union are being harassed on the work floor and even during their short toilet breaks!

When will greedy billionaire owners stop stealing from their employees, running to world-wide tax havens, and start accepting responsibility for economic inequality?

When will they pay their fair share of taxes?

If they don’t, fascism can happen here. But that may be what they want.

Exhibit 3: Abortion has been around Homo Sapiens for 300,000 years but did not play a major role in politics until the Supreme Court and Roe v. Wade in 1973. Then the Republican Party decided it could get the fundamentalist Christian and the Roman Catholic vote if they kept abortion simmering on the political burner.

Between elections they didn’t give a damn about pro-life policies. Face facts. Sex has always been an interesting and constant activity for humans. Even the supposedly celibate Catholic priests have cost the Vatican billions in sexual abuse lawsuits. There is no natural law about Vatican sex.

Yes, “life” begins at conception, but it really doesn’t start until birth. Medical authorities say up to 20% of pregnancies end in miscarriage.

Life can be tenuous. We don’t know whether a pregnant egg is going to be a Martin Luther King or a Jeffrey Dahmer, a cannibalistic serial killer of 17 men and boys.

It’s too bad so many Christian voters are pro-fetus and anti-child. Some march, protest and pray around abortion clinics. Some have killed, bombed and assaulted abortion providers in the name of God.

But when it comes to provide for the welfare of children and parents, the “conservative” Republican politicians vote against Head Start, women’ and children’s nutrition programs (WIC), SNAP (food stamps), pre and post–natal care, universal health care, sick leave, maternity leave, parental leave, minimum wage, and oppose the use of contraceptives.

They vote against insurance coverage for contraceptives and impose taxes on female “period” supplies. Bible thumpers won’t even accept the fact that birth control will actually reduce unplanned pregnancies.

Stuff and sex happens. Pro-lifers don’t want to accept rubbers on penises but readily accept them as protection for the feet.

It was noted by riot viewers that many evangelical “Christian” men who make a living off challenging the pro-choice movement are also involved in trashing the Capitol and democracy. With the advent of the TrumpliQAnon Party, fascism can happen here.

There are thousands of “sources.” Is the truth in Fox News? The New York Times? Twitter? Wall Street Journal? Infowars of Alex Jones? Trump on the tarmac? Fargo Forum? Instagram? Newsmax? Washington Post? Facebook? CNN? One America News? In the thousands of podcasts? In the mouth of the president’s press secretary? The Guardian? MSNBC?

Polls are taken every day on political subjects. Are they all reliable in that moment of time?

A Morning Consult poll recently revealed, that the more educated people were, the more they believed QAnon propaganda! The poll reported that 27% of persons with a postgraduate degree said QAnon info was accurate!

So it’s true that Democrats kill children and drink the blood to get an enzyme?

Only 14% with a high school education believed it. Only 20% with a college degree believed it.

Can we believe a THE WEEK story that 34-year-old Rosanne Boyland, one of the five people killed at the capitol riot, was trampled to death during a panic run carrying a yellow “Don’t Tread On Me” flag?
Historian Timothy Snyder in The New York Times wrote on Jan. 22: “Post-truth is pre-fascism, and Trump has been our post-truth president. Like historical fascist leaders (Hitler and Goebbels), Trump has presented himself as the single source of truth. His use of the term “fake news” echoed the Nazi smear “lying press.” He referred to reporters as “enemies of the people.”

Trump lied (30,751 of them) at a pace perhaps unmatched by any other leader in history. To believe in them all was to accept the authority of a single man, because to believe in all of them was to disbelieve everything else.”

If all of Trump’s lies are not disproved, fascism can happen here.

Exhibit 5: This is the story of two colosseums about 2,000 years apart. In Rome we had Christians fed to lions, crocodiles, tigers, and hippos sponsored by wealthy senators for the free entertainment of their citizens. We had naval battles take place on the flooded floor. We had gladiators live or die by an up-thumb or a down-thumb, depending upon whether they had put up a good bloody fight for the crowd of up to 70,000. Criminals were also executed in the arena.

In Tampa we had football teams owned by billionaires play for the National Football League title surrounded by patriotic songs and chants, a military flyby by fighter jets and bombers, a half-time show that might have repelled visitors from outer space, and messages about Black Lives Matters because about 80% of the players on the field were black millionaires.

The 64 billionaires who own major league sports franchises made another $1.53 billion each during the last 10 months while we have 40 million families facing eviction or foreclosure and millions lining up for food at food banks.

Will priorities determine whether fascism will happen here?

Super Bowl tickets went for $6,753 this year. It would take an essential worker up to six months to earn the price of a ticket.

Admission in Rome was free. What’s that line about if you don’t study history you are bound to repeat it?