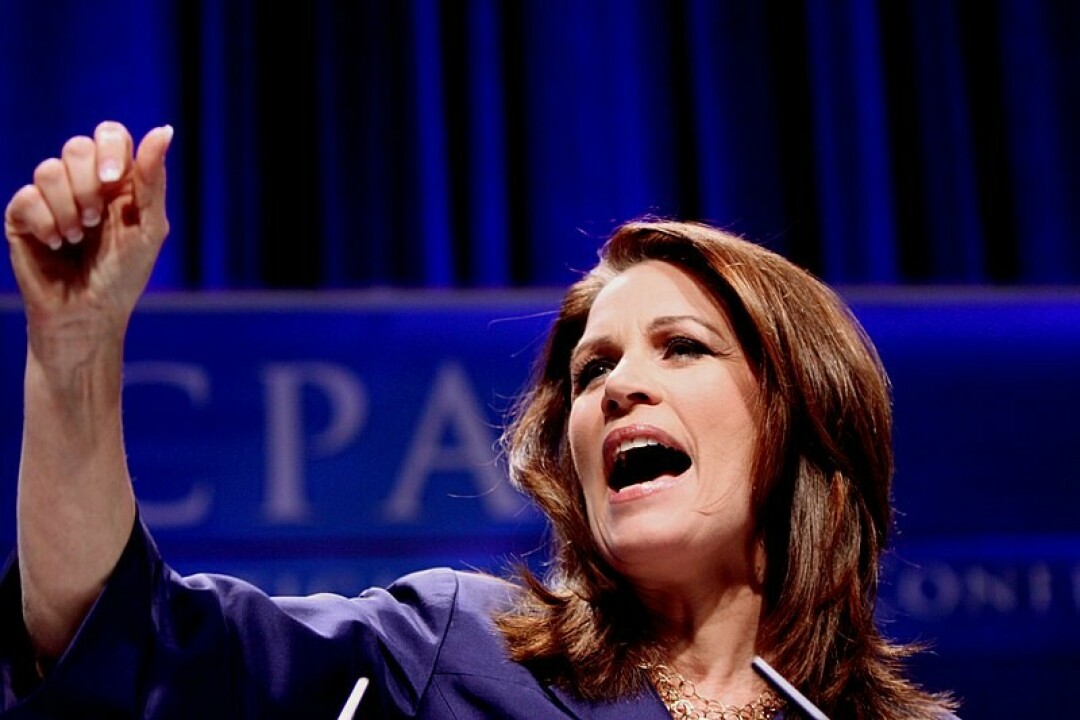 Michelle Bachmann said regarding Trump,“We will in all likelihood never see a more godly, biblical president again in our lifetime.”

There was a fascinating headline in the Wall Street Journal recently: “How Would Jesus Vote? Nobody Knows.”

Maybe if a person read the Bible one could get an idea. Why not list some major issues separating our two political parties and then guess whether He would vote for or against? Fill in the blank with a “D” if you think Jesus Christ would support the issue. Put in an “R” in the blank if you think He would oppose it.

After Jerry Falwell, Sr. of the “Christian” right blamed the attack of Sept. 11, 2001, on “the pagans, and the abortionists, and the feminists, and the gays and lesbians, who have tried to secularize America,” an atheist intellectual named Sam Harris predicted that “at some point ... it’s going to be too embarrassing to believe in God.”

We haven’t reached that point yet, but research scientists have run an analysis of 63 studies and found that religious people are less intelligent than atheists. They say religion is more of an instinct of self-preservation, and that people who can rise above human instincts are more intelligent than those who rely on instincts.

King Donald always says he relies on his “gut.” His gut was always uninformed.

Back in Greece and Rome times, many top philosophers remarked that “fools” tended to be religious while the “wise” were absolute skeptics of religion.

Where did all those Trump  voters come from?

Whenever Trump spoke of millions of illegal votes and corrupt vote counting, he always added a million or two to his 74 million voters. Exit polls and other means indicate who his voters were. Edison Research says, of the 28% of the voters identified as Southern white, born again and evangelical Christians, 76% voted for Trump.

Besides that category, some Trump voters identified themselves as Christ-ian nationalists or members of white power groups who believe the Divided States of America DSA) should be a Christian nation governed by Christian values.

The problem is: what are those Christian values? What have Trump-licans left? What do the preachers and the Internet websites preach?

The insurrection at the Capitol seem-ed to be a resurrection of the Christian Identity movement, which drew major attention in 1984 with the deadly militia battles between our government and organizations such as The Order, Aryan Nation, the American Nazi Party and other white supremacist groups.
The movement started in Britain and moved to the DSA in the 1920s with the idea there were “lower races” mentioned in the Bible. It is a white supremacist theology that is attractive to Tea Party and other alt-right Trumplicans.

Simply put, all non-white people have no soul and therefore can never earn God’s favor or salvation.
The founder of the American Nazi Party, George Lincoln Rockwell, often rhapsodized that Europeans were the chosen people. (Remember, today’s evangelical Christians believe Donald J. Trump is “The Chosen One” to lead the United States after a “low race” black named Barack Hussein Obama left office!)

Jews were memorialized as the ac-cursed offspring of Cain. This theology brought about the murder of six million Jews, gays and disabled human beings during Hitler’s Third Reich.
Christian Identity followers believe that only Germanic, Anglo-Saxon, Celtic, Nordic and Aryan people will survive when Christ comes down to earth again at the End Times. All non-whites will be exterminated or will be enslaved.

Whites are called “Adamic People” and will be the only ones to enter Paradise.

Oklahoma City bomber Timothy McVeigh was an advocate of Christian Identity theology, and Gordon Kahl of Medina, North Dakota, fame was a member who turned into a tax resister, murderer of federal agents, and an organizer of militias like The Order. Kahl, an Air Force rear turret gunner, finally was shot to death by a sheriff in Christian Identity–loving Arkansas.

Many Republicans have adopted and adapted the theology of two major white supremacist denominations, The Christian Identity and the Christian Dominionists.

Franklin Graham has twisted his father’s beliefs to accept the theology of both groups for his evangelical Christians. He insists that God was behind the election of Donald Trump. Former GOP Representative Michele Bachmann, who ran for president under the Dominionist label, says this about King Donald today: “We will in all likelihood never see a more godly, biblical president again in our lifetime.”

There are quite a number of Christian Dominionists in the Congress of the Divided States of America who shelter on the broad shoulders of the evangelical Christians.

Texas Senator Ted Cruz is perhaps the best known because he has earned the title of the most hated man in the Senate. Cruz’s father is a Christian Dominionist minster who has appoint-ed his son the King of Texas. I don’t have room to fully explain that fact.

Christian Domionists believe God wants Christians to take control of the government and run the country by Biblical law. They base their theology on Genesis1-28: “Be fruitful, and mul-tiply, and replenish the earth, and subdue it: and have dominion over the fish of the sea, and over the fowl of the air, and over every living thing that moveth upon the earth.”

Dominionists believe it is a divine mandate to claim dominion over the earth, physically, spiritually and politically.
D

ominion believers have two major philosophies: Christian Reconstructionism and what they call Kingdom Now. Reconstruction is based on the idea that dominion over everything can only be achieved by each Christian absolutely excelling in whatever they choose to do. If they excel, they take dominion. If they are a musician they must dominate the field. If they are in business they must dominate the business world.

We have many Christian Dominionists among our 660 billionaires. Dom-inionists will reach Kingdom Now when they “subdue” all systems and fields.

Dominionists are known as “soft” if they believe America is a Christian nation. “Hard” Dominionists actually run the government using Biblical law. They believe God wants them to not only take political control of the United States but they also have a responsibility of turning the entire globe into a white Christian empire.

Where does the Vatican fit with Christian Identity/Dominionism?

The Christian Right got energized when the abortion case Roe vs. Wade went to the Supreme Court in 1973. It realized they had a real issue to use against liberal Democrats – and the Republicans found out they could get millions of partisan votes if they convinced the Christian Right they would join them in religious political battles over abortion and social liberalism.

The inauguration of Catholic Joe Biden showed how the Roman Catholic Church has increased its influence in American politics in the last 100 years.

Research indicates the Catholic vote has been split between the two parties for years.

To The Christian Dominionists And Identifiers - Add Some Roman Catholics

Ever since Jesus picked twelve men as apostles, gray Catholic men have used it as an excuse to keep women pregnant in the kitchen and out of the pulpit. Without the advice, counsel, and leadership of those who give birth, the Vatican has been bedeviled by sex and Satan for 2,000 years. The subject was too complex for them. That’s why the old ornate Catholic cathedrals of Europe are almost empty and the largest “religious” group in the DSA is made up of ex-Catholics.

Almost before Biden’s hand came off the family Bible at his swearing-in, Archbishop Jose Gomez, the conservative president of the U.S. Conference of Catholic Bishops, issued this statement: “Our new president has pledged to pursue certain policies that would advance moral evils and threaten human life and dignity, most seriously in the areas of abortion, contraception, marriage, and gender. Of deep concern is the liberty of the church and the freedom of believers to live according to their consciences.” What planet does he live on? Those “areas” are legal in the DSA!

The six Catholic Supreme Court justices represent many centuries of Vatican thought. Alito loves the 14th Century because of love for “feudal” corporations and hate for union workers. Thomas loves the confusion of the 15th Century and often joins Alito in opinions. Otherwise he keeps his mouth shut but throws errant darts in opinions. Kavanaugh loves the 17th Century so he could attack Galileo and burn Giordano Bruno at the stake. Barrett loves the 18th Century because she is a follower of Antonin Scalia’s nutty “originalist” scheme of Constitution interpretation. Roberts loves the 19th Century and hates that his court has succumbed to politics. Santomayor is the only Catholic on the Court to live in the 21st Century.

In addition to the controversies of abortion, contraceptives, same-sex marriage, and other aspects of gender, the Vatican still believes Paul’s admonition “Let women be silent in church assemblies.” In the 16th Century Pope Clement loved music and young voices, so to maintain alto and soprano parts, he had boys castrated so he could fill the alto and soprano sections. After all, females had to be silent in church. The castration program lasted until 1870. Hell, that’s only 150 generations.