Jottings: the only way to touch ‘em all 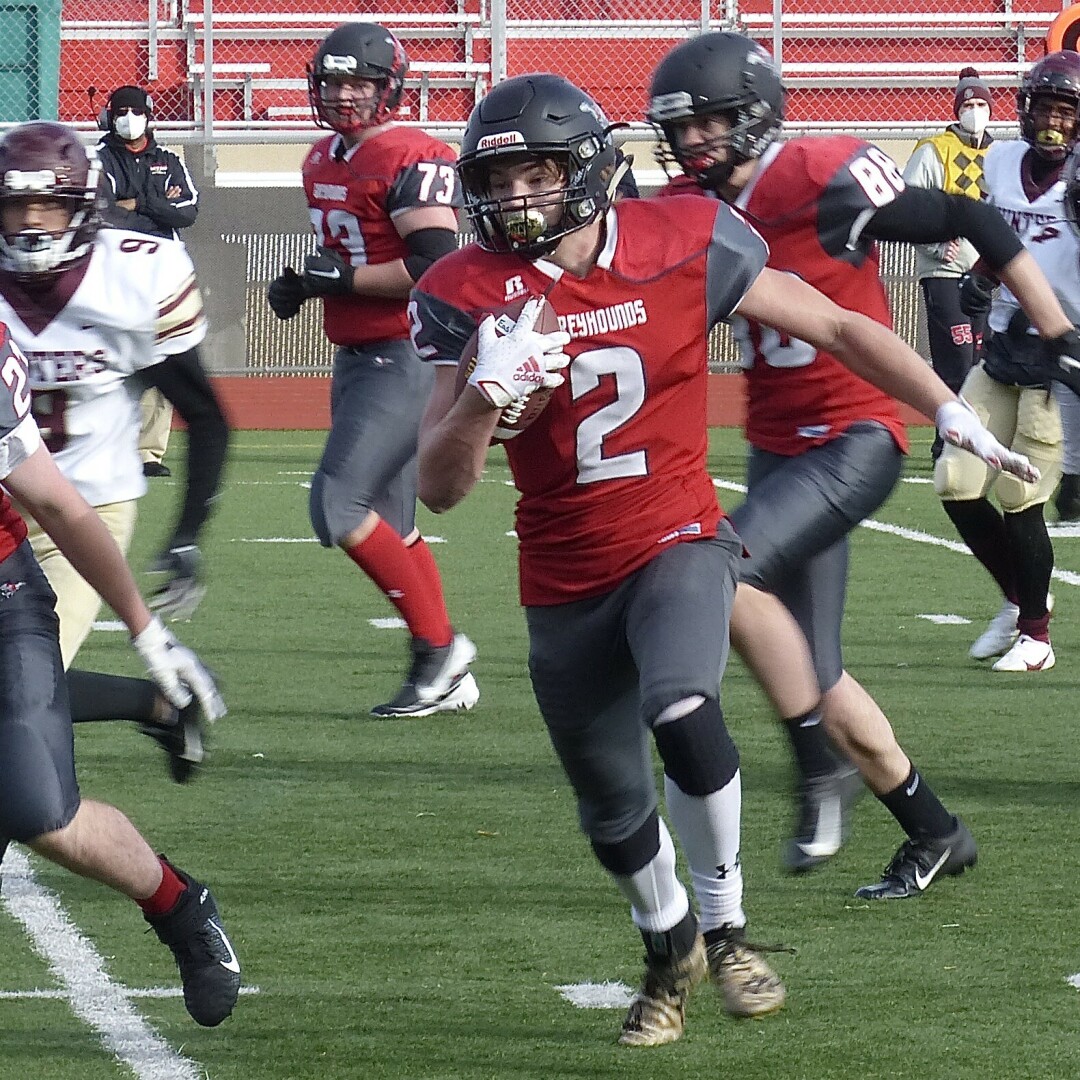 We can pay tribute this week to Sid Hartman, by the simple use of “Jottings:” as our headline. It also serves a dual purpose, because Sid — who died Sunday at age 100, on the same day his final sports column appeared in the Minneapolis Star Tribune — made that term his own by his scattergun style of trying to get something in on as many sports topics as possible every day.

I worked with Sid at the Minneapolis Tribune for 31 years, although when you worked with Sid, you weren’t sure if you were working with him or against him, because in his zeal to get the news first in his highly competitive world he also had to get it before the various beat writers on the same staff. Because Sid was never really into hockey, our paths didn’t cross much in the college, high school, NHL and WHA arenas where i did my work. And I would have to say he never would have accused me of being one of his ubiquitous “close personal friends.”

He would insult us all, and maybe that was his method of acknowledgment, and I would counter by asking him if he sent out his hundreds of Christmas cards, all addressed to “Occupant,” while trying to cultivate more sources.
But while praising his relentless daily work ethic, today the term “Jottings:” also means there is so much news in the regional sports scene that the only way to touch everything is to go to Sir Sidney’s rapid-fire approach. For example, we have baseball reaching the World Series, football where the Vikings nosedived to their worst performance of a 1-5 season in losing to previously winless Atlanta. We have the Gopher football team swinging into action to open an abbreviated Big Ten season against perennial power Michigan this Saturday in Minneapolis. We have the UMD Bulldogs hockey team heading for Omaha for a creative 10-game start to their NCHA season, with all teams playing for three weeks to get their schedule started, and news of that process was just released a couple days ago.

And right here in the Twin Ports we have an amazing flurry of activity, with high school football and volleyball just starting in earnest after other prep sports were able to start normally because they weren’t considered as high risk for crowding and Covid-19 contamination. Tennis had an exciting season, and Duluth East brought home the elusive Section 7AA championship, behind the superb play of No. 1 singles star Aili Hietala and impressive depth — with no state tournament to advance to. Same for the cross country runners.

But the biggest stories in the area are the fantastic upswing in high school soccer for both boys and girls, and in both Class A and AA. Maybe it’s appropriate that in this pandemic-shortened season, the Section 7A and 7AA championship showdowns were scheduled for Wednesday, but the looming approach of snow, sleet and travel advisories may have pushed it back to Thursday, Friday or even Saturday. You’ll know before the Reader will. 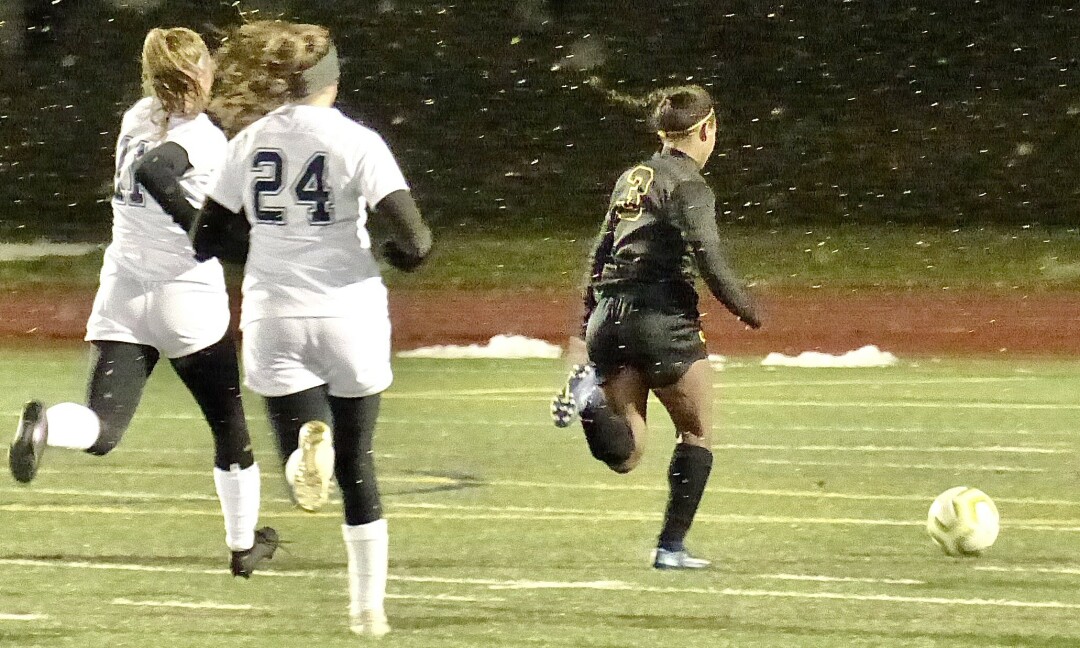 Marshall's Baamlak Haugen raced away from the St. Francis defenders for one of the four breakaways she had in the 7A semifinals. She shot wide on two, hit the right post on this effort, but scored on the one other for a 1-0 Hilltopper victory.

Along the way, we can already bow down to the Denfeld boys team, which absorbed some crushing soccer setbacks in the last week of the regular season. That included being blown out 11-0 by a powerful and undefeated Cloquet-Esko-Carlton-Carlton outfit. But Denfeld came away with the kind of unifying, cohesive team chemistry right at playoff time.

The Hunters had no argument when they were seeded eighth, they just went out and beat ninth-seeded Hermantown 4-0 in the first round. We were commenting about how their reward was a trip to Cloquet to play the team that had just humiliated them 11-0. But Denfeld upset the Lumberjacks, who hadn’t lost all season, in a 1-0 classic. That sent them to the semifinals at Grand Rapids Monday, but the weird and fast-closing wintry weather had coated the new Grand Rapids artificial turf with ice, so the game was moved to Public Schools Stadium, where there already was a game scheduled — the Class A semifinal for the Marshall and Anoka girls.

No problem. The didn’t have to worry about hustling many fans out of PSS because of limitations on allowed fans, and s soon as they cleared out, Denfeld, wearing the visiting white, stunned Grand Rapids 5-0. Xavier Decker scored two goals and assisted on another to help Denfeld advance.
As it turned out, Princeton gained the finals in the other bracket, which means the Hunters, who haven’t given up a goal all through the playoffs, will go for their fourth straight shutout in the final.
Meanwhile, before the snow flurries started to get serious Monday night, Marshall knocked off St. Francis 1-0 on a breakaway goal by speedy little Baamlak Haugen. She got loose twice earlier, speeding past the Saints defenders but shooting wide, before she connected after scoring star Maren Friday sent the ball ahead and through the defense where only Haugen could get to it. Friday, who was surrounded and knocked around most of the game, got tougher in response, but she, too, hit the post on a break-in. Seeking the clincher late in the game, Haugen sped through the defense one more time, racing in at full speed, only to fire a shot that glanced off the right post.

No matter, the 1-0 lead held up for a 1-0 victory, and, with Cloquet-Carlton getting goals from Jillian McCullough in the first half and Brenna Mattson and Alexa Snesrud in the second half beat Zimmerman 2-0. So Marshall plays at Cloquet for the 7A title.

There was more on the soccer pitch. Duluth East earned the right to play at home at Ordean in the first round, and knocked off Anoka 4-3 to open the playoffs. Next came a trip to the Twin Cities for a semifinal at Andover. It stood 1-1 until Kai Hoffman went to work, scoring to break the tie before halftime, then scoring twice more to open the second half and lead the Greyhounds to a 6-3 victory and a berth in the 7AA finals. Now 12-1-1, East takes on Centennial for the title on Thursday.

Back when it was sunny and clear, if chilly, the annual rivalry football game took place with Denfeld playing at East. The Greyhounds, with mostly a new cast of characters, were too much for Denfeld, as sophomore running back Austan Orvedahl scored three touchdowns, and Aaron DeBeir scored two more in a 48-0 East romp. 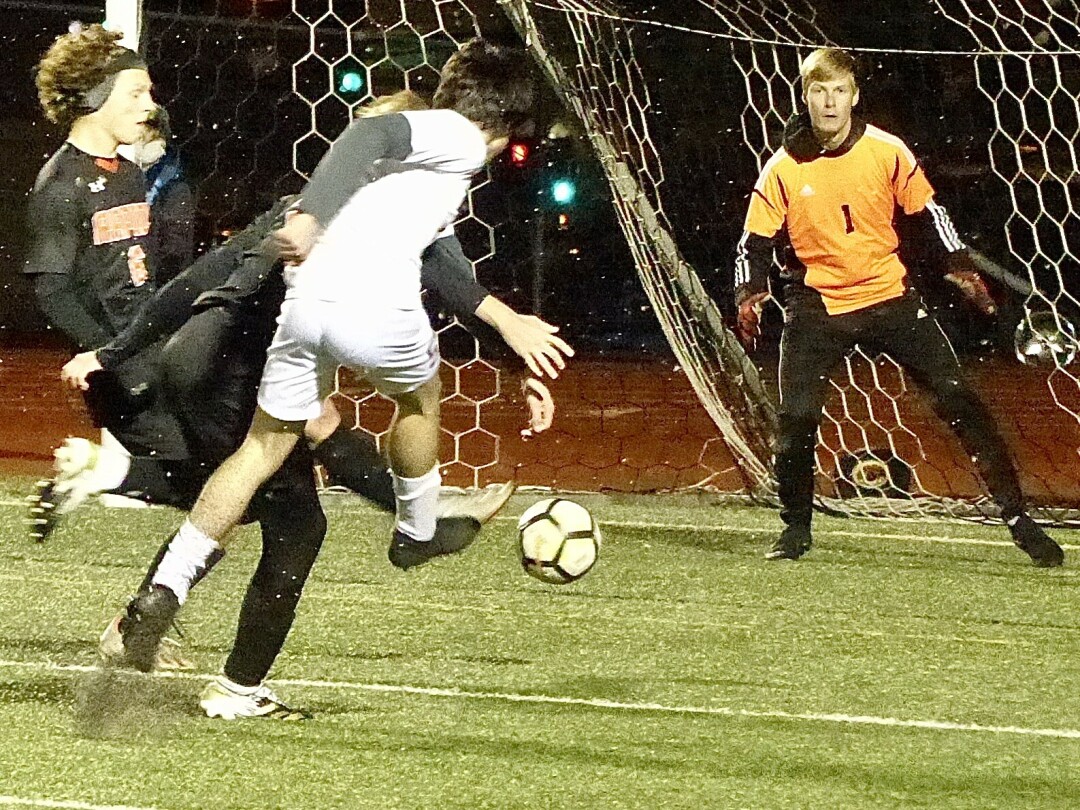 Denfeld’s Logan Colt blasted a shot just past Grand Rapids defender Cal Johnson, but Thunderhawks goalkeeper Chris Pederson came up with the save. The Hunters won 5-0 to reach the Section 7AA finals.

The World Series just getting started after a highly entertaining pair of 7-game playoff series leading to the emergence of the Tampa Bay Rays and the Los Angeles Dodgers. They are, statistically, the best two teams in the Major Leagues, with the Dodgers having the best record in the National League and Tampa Bay the best in the American League. They showed their skill in the divisional finals, where I must say the Rays showed me the best defensive play I’ve ever seen in a long playoff to escape from the Houston Astros. The Dodgers had to survive an explosive Atlanta Braves outfit in a strange series that included the Braves winning the first two games, 5-1 and 8-7, then the Dodgers scoring a record 11 runs in the top of the first for a 15-3 Game 3 blowout. The Dodgers also won 10-2, then lost 7-3, in the momentum-baffling series, and Atlanta also beat them 3-1 in Game 6, to set up Game 7, a 4-3 Dodgers victory.

My pick was Tampa Bay, just for the neat touch of that city winning both the Stanley Cup and the World Series. Of course, LA could create a double also, having won the NBA title.
In college hockey, the NCHA is mimicking the NHL bubble playoffs, but with an interesting twist. Hoping the pandemic allows a somewhat normal if late regular season, the NCHC teams will play their 10 games against teams that would require the most travel. The would mean UMD won’t play St. Cloud, or North Dakota, because those are bus trips instead of the much costlier air travel required of playing Denver or Colorado College. In that way, when “normal” play begins for the shortened remainder of the season, teams won’t have to make the costliest trips and can save money as well. It’ll all start December 1.

We may not want to dwell on the Vikings, who were embarrassed 40-23 by Atlanta’s winless Falcons Sunday. Whatever it is that quarterback Kirk Cousins has, it may be contagious. He threw three interceptions, and only some meaningless late-game points avoided an even worse result. But Aaron Rodgers caught it, too, and after leading the Packers to a crisp 10-0 lead in the first quarter, Tom Brady came back to register four second-quarter touchdowns, and the Buccaneers unpacked the Packers undefeated record 38-10 — 38 straight points after the 10-0 Packer lead. The Chicago Bears held off Carolina 23-16 and Detroit beat Jacksonville 34-16, which means the Vikings are now 1-5 and the only undefeated team left in the whole conference is Seattle, which was idle.

The brings our jottings back to Sid Hartman. I always hoped that Sid and I could become friends, instead of news-tidbit rivals. The best we did was a stretch where he asked me about how Mercedes cars were. This was back in the early 1970s, and I gave Sid extensive scouting reports on the Mercedes models I had test-driven for my column, On the Road, which ran in the Minneapolis Tribune and later Stars-Tribune for all 31 years I worked there. Sid asked the right questions, and I presented some significant reasons why Sid might want to check out a couple models of Mercedes cars, instead of simply buying another new Cadillac every two years. When it came time, of course, Sid always bought another Cadillac.

He did his research, but he always played by his own rules. Sid was never much for pulling for the underdogs, at any time. When the state hockey tournament was held, and everybody in the building was cheering for Warroad to knock off perennial power Edina, Sid would be cheering in the press box — for Edina. Who cared about underdogs when they’re going against money, prestige, and hundreds of Sid’s close personal friends who might give him a valuable tip somewhere along the line. It’s been said many times this week that there will never be another sportswriter like Sid Hartman. And that’s true.

He was Minnesotan through and through, except for St. Paul, which he called “East Berlin.” And he cheered for the home teams so much, that I must say that I heard the news that Sid had died just after the Vikings horrendous performance against the Falcons. I turned to my wife, Joan, and said, “The Vikings were so bad, they might have killed Sid!” Somewhere, I hope Sid’s spirit is soaring overhead and maybe he’d get a chuckle out of that. Or at least a Jotting.