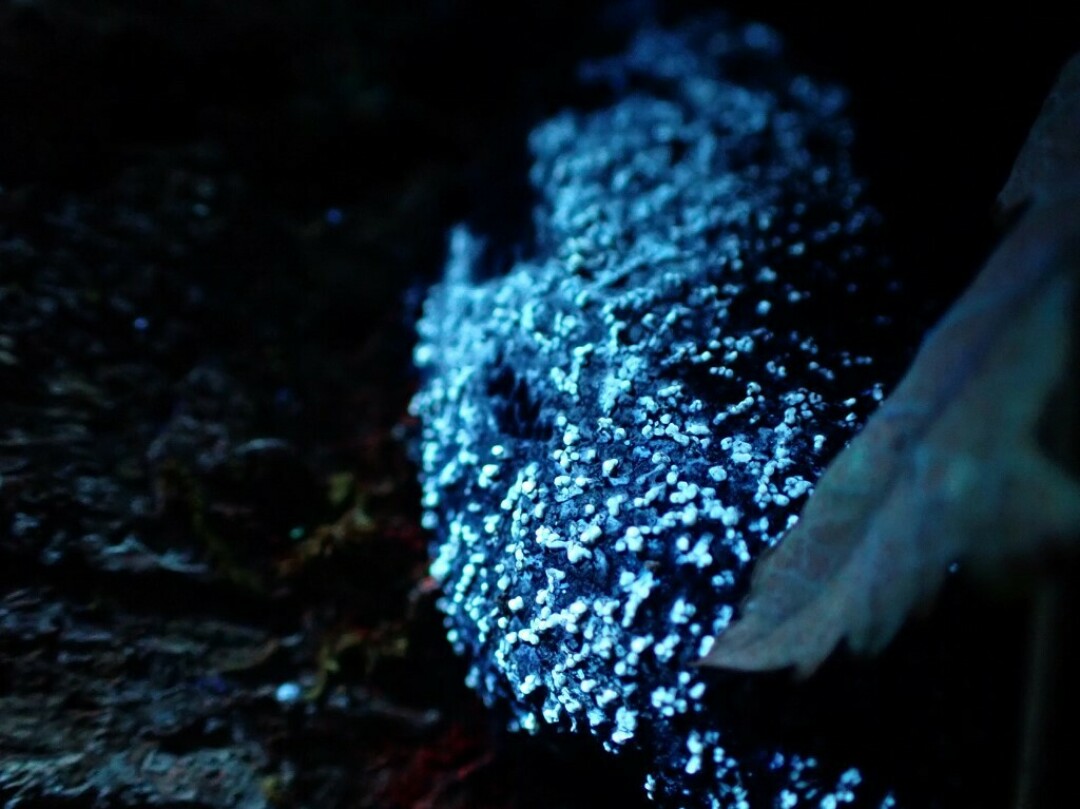 In a typical year, I race up and down my winding, woodsy driveway, always in a rush to get somewhere. This year has been different. I’ve found myself walking and biking from home, often with a little more leeway for stopping to smell the roses, or photograph the moss, or interrogate a slug with my new UV flashlight.

It was on one of those early morning walks that I happened to notice a white blob on a hemlock stump. This didn’t take any great skill with observation—the blob was over a foot high and several inches wide, and it contrasted neatly with the flaky brown hemlock bark. I snapped a photo.

The next day, I again walked by. The blob had changed shape. Using the “microscope” setting on my new camera, I looked close and zoomed in closer. The mass of white was made up of many tiny white pearls, each with a wetly shimmering surface. They were…beautiful?

This time, I fired up the “SEEK” app on my phone. With access to the entire database of correctly identified photos of nature in the iNaturalist website, SEEK can take over the camera on your phone and identify plants, animals, and others in real-time. The name that popped up on my screen was so fitting that it made me giggle: tapioca slime mold.

Slime molds are curious creatures. While they are usually studied by mycologists, they are not mushrooms. Instead, slime molds are amoebas. The white mass on my stump was a single cell that grows by making copies of the cellular nuclei within. Scientists call this stage in a slime mold’s life cycle the “plasmodium.” Its role is to find and absorb food—which includes bacteria, dissolved substances, fungi, and organic matter—off the surface of the stump.

I visited this new neighbor every day for a week, and while I could sense no movement in real-time, a comparison of my photos revealed that the mass was moving and changing shape. From a multi-lobed leading edge, the mass formed a pointed wedge and rose higher on the stump. It then narrowed into a long, discontinuous snake, before ceasing movement and changing colors instead, from peach, to dark mauve, to brown. 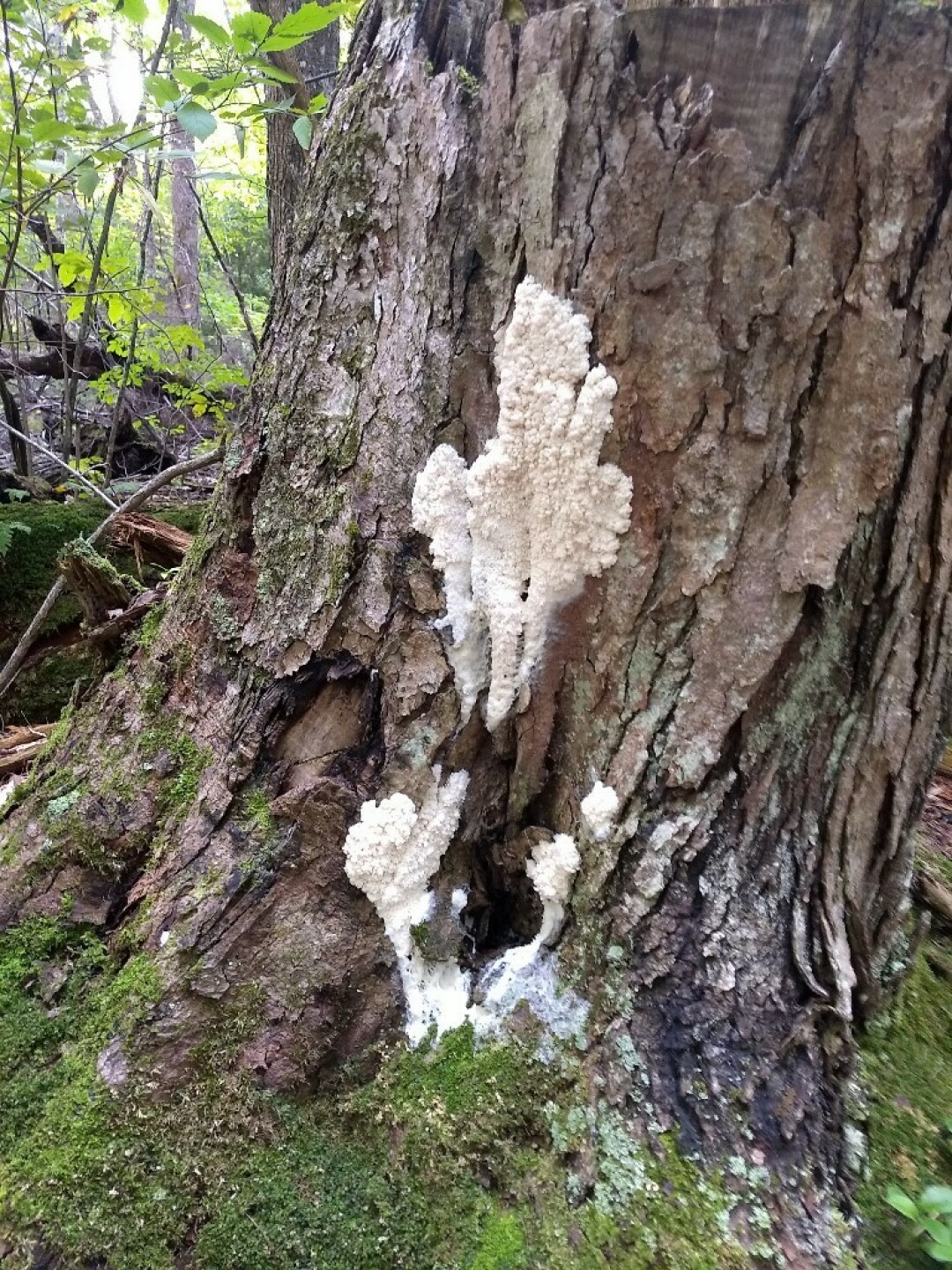 A single, giant, living cell, called a tapioca slime mold, colonized the stump along my driveway this fall.

The ability to move is one of slime molds’ most terrifying and fascinating characteristics. In 1958, a movie titled “The Blob,” starred a slime-mold-like, human-eating alien that oozed around a terrorized town. While the movie notes for “The Blob” reveal a flowing mass of silicone tinted with red dye, real slime molds move through a pulsing action called “cytoplasmic streaming.” Basically, the contents of the cell, called cytoplasm, pulse toward the growing tip and away from the retreating edge.

Since the 1970s, though, a vibrant yellow slime mold in the genus Physarum has been used by scientists as a model organism to study the beginnings of intelligence and learning. Like many trainable animals, Physarum is food-motivated. The amoeba and I happen to share a common a love of rolled oats. When placed in a maze and bribed with food, the slime mold can use its network to find the shortest path to the prize, or mimic the efficient connections of Tokyo’s rail system by connecting dollops of oats. The PBS series NOVA recently premiered an episode titled “Secret Mind of Slime” on this very topic.

One of the reasons that Physarum is able to solve these problems efficiently, is that it can tell where it’s already been, so as to avoid making the same wrong turn twice. Its memory isn’t internal, though, it’s external. The slime mold, unsurprisingly, leaves behind a trail of slime as it moves. Studies show that the protoplasm avoids growing back over its own slime.

The tapioca slime mold on my stump also left behind a skim of dried slime to show where it had been. The brittle, cellophane-like crust even shimmered a little in the sunlight next to what once was a delicate cluster of pearls. Now a powdery brown mass of spores, the plasmodium stage of the slime mold’s life cycle had come to an end in under a week.

The spores will drift off in the wind, or perhaps travel away on a beetle. While I’m staying close to home, tapioca slime mold spores are blowing around the world. In moist soil, the spores will germinate and produce new, free-living cells. Those free-living cells—each with only half the number of chromosomes—will combine and produce a new, tapioca-like, plasmodium stage next year. I’ll be watching for it.

Recently, I wrote about the fluorescence of mosses, grasses, and fungi. Of course, I also shone my UV flashlight on the tapioca slime mold. Initially, the mass of white pearls shone an eerie, greenish white. Later, the body of the brown, spore-filled stage did not glow, but a sprinkling of mysterious blue-white spheres—barely visible in daylight—responded to the new spectrum.

During this challenging year, I think many of us have been pleasantly surprised at the discoveries we can make close to home if we just slow down. Perhaps we can use some wisdom from slime molds: move slowly, stay connected, and don’t repeat mistakes. 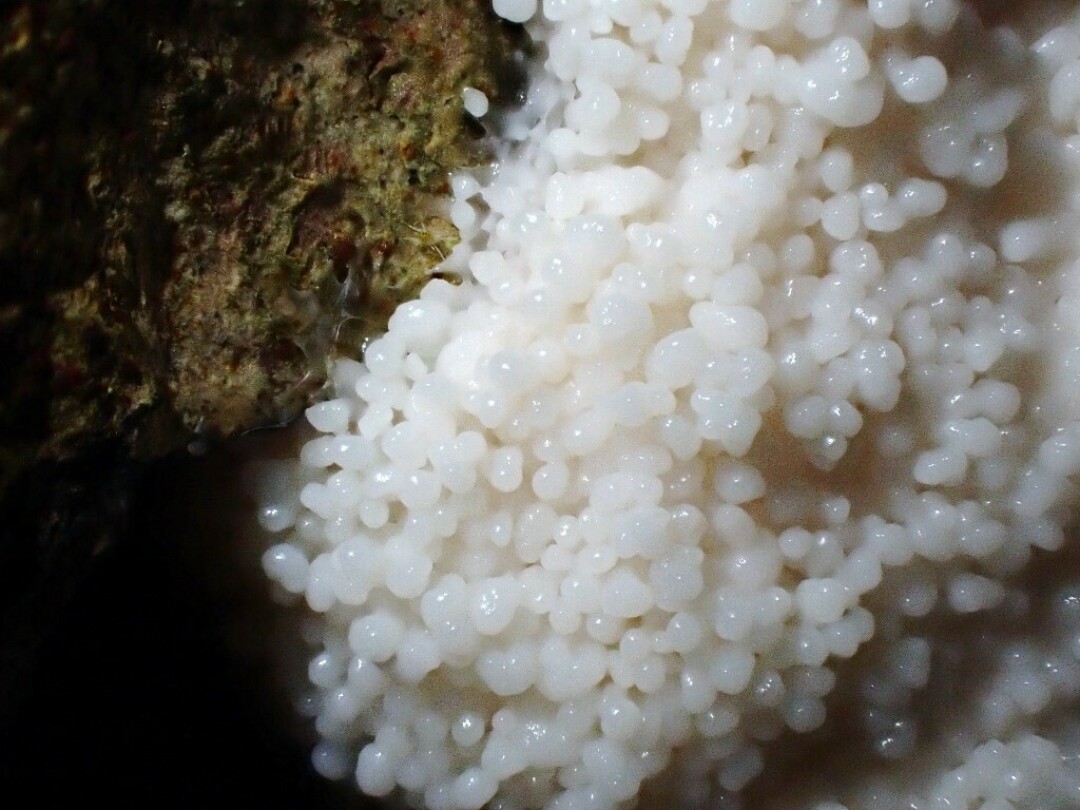 Tapioca slime mold gets its name from the texture of its plasmodium life stage.

Emily’s award-winning second book, Natural Connections: Dreaming of an Elfin Skimmer, is now available to purchase at www.cablemuseum.org/books. Or order it from our friends at redberybooks.com to receive free shipping!

For more than 50 years, the Cable Natural History Museum has served to connect you to the Northwoods. The Museum is now open with our brand-new Mysteries of the Night exhibit. Connect with us on Facebook, Instagram, YouTube, and cablemuseum.org to keep track of our latest adventures in learning.