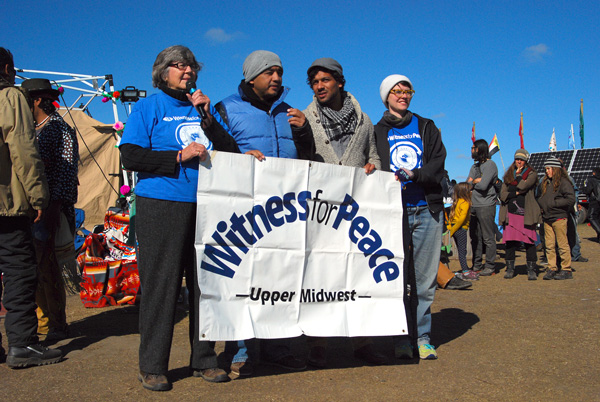 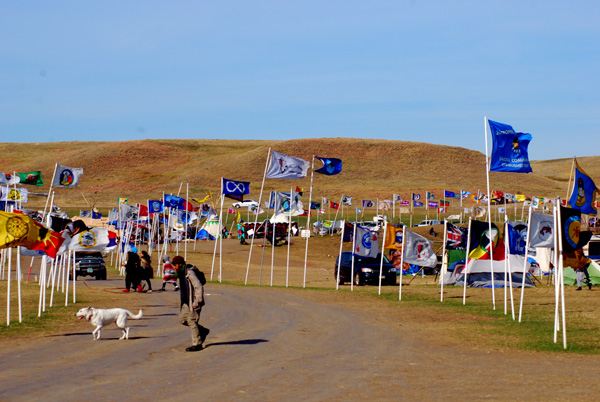 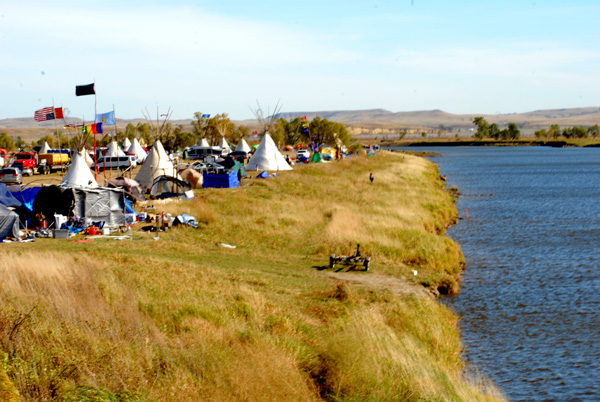 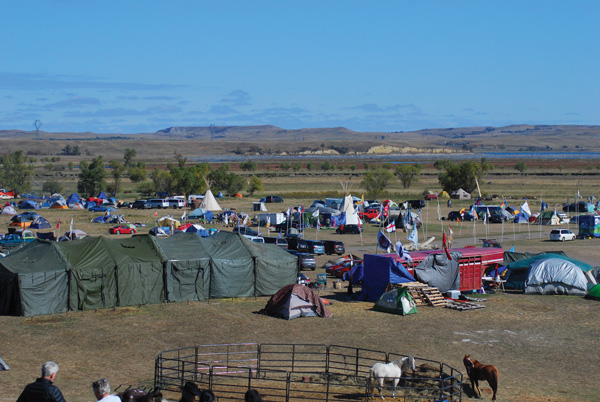 We took a left at Bismark and left behind our notional idea of a free country. We approached a machine gun guarded Warsaw Ghetto-like border with every terrifying high-tech modern update awarded by the Patriot Act. Stingray intelligence gathering, License Plate scanning, photographing every car and occupant for some sort of terrifying compilation into some arcane database and telephone signal jamming and wifi jamming all started here. I witnessed LRADs ,MRAPS and military assault vehicles as well as a large number of anonymous government support vehicles and a large portion of  Morton County Sheriff’s fleet of SUVs racing towards the camp border. The checkpoint of cement barricades, set out on a public US freeway, rivals anything you might see in a Middle Eastern firebase set in enemy territory. We were approached by a National Guard kid with an automatic rifle who politely questioned what we were doing here and where we were going and looked as if he was somewhat embarrassed to be following these particular orders, especially when he was offered coffee and thanked for his service by the people in the vehicle as we were passed through.

And then everything changed.

We crept across some sort of DMZ and passed the bulldozed graveyard of the past inhabitants of this area surrounded by a vigil of protectors, the only difference between this and Arlington National Cemetery being that it was not marked in plain English by government issued gravestones, as that is not the tribe’s tradition or language. As we passed this area, the palpable fear lifted and we passed into The United Native Nations that has sprung to life quite organically and  fully formed to protect the water and lifeways. The fearfulness was blown away by a strong North Dakota wind and a sense of unprecedented Sisterhood and Brotherhood of international indigenous people and allies on the right side of history. The coalition of people includes North and South American tribes that may have been enemies historically , and people fighting harrowing, and real life and death battles in Honduras, Venezuela, Columbia, Europe, Canada and other countries throughout the world.

There are a moving average of 3,000 to 5,000 occupants of the camp. Foremost on everyone’s mind is surviving an impending and extremely daunting North Dakota winter with what amounts to a new small city intent on following the old traditions and shelter systems and this has the camp thinking hard about infrastructure and survival for all the members of the camp.

All of this community has sprung from a youth run and a woman’s prayerful communion asking their creator and ancestors for help in discerning the right path to achieve their aim to save their people. The answer came as a relentlessly peaceful and open-hearted speaking of truth to power. This attitude of spiritual and prayerful faith was palpable in all of my experiences throughout the camp. Personally, I was often introduced as someone trying to protect the bees and pollinators, and working towards that in positive ways, so I was granted access and membership to this struggle. This is only pertinent because this brings up the fact that there are EPA protected and endangered species on the land being threatened by the pipeline construction area and its inevitable fallout. These include the Dakota Skipper (Hesperia Decotae), a butterfly pollinator, The Powersheik Skipperling butterfly, the Least Tern, The Pallid Sturgeon, a resident since the dinosaurs, The Whooping Crane, the Western Prairie Fringed Orchid, The Piping Plover, The Red Knot Bird,  The Northern Long Eared Bat, the Gray Wolf, and the Blackfooted Ferret which are all listed as either as endangerd or threatened species. The breadth of the list itself is sickening, and even more so when you add the Dakotah tribe to the list and the 17,000,000 people who utilize this aquifer, along with endangerment of  journalism, free speech and dissent.

The full force of an Orwellian and disproportionate and dystopian corporate fascism has swung into action opposing this organic and prairie-grassroots peaceful protest. The astroturfing ProDAPL  websites have been set up with anonymizing proxies to try to sway public opinion and circulate claims of terrorism coming from this pacifistic movement. Journalists , such as Amy Goodman are being threatened by extending arrest warrants to chill the access to covering this story. Dogs have been set loose by Frost Kennels, a sub-contractor of GS4, which is itself a private mecenary and security company used in Iraq, Afghanistan, and Columbian pipeline projects and a competitor of Blackwater. These thousands of Water Protectors are being corralled into those FEMA camps everyone was so worried about, put behind bars, attacked by dogs, threatened with shotguns aimed at their heads, surveilled and harrassed by helicopters and goaded to try to make them do something wrong. Civil rights are being systematically violated including my own freedom of expression which was temporarily suspended while I visited a certain zone of the country.

I have never thought I would see this level of authoritarianism within my own country and this was a wakeup call as to how we are projecting our “freedom” to other parts of the world. What is being done in the name of corporate interest should give us all pause as to where all of us really stand in relation to the concentration of corporate power and money and the militarization against any form of dissent

Me, I am shaken, but still standing with humanity and Standing Rock.